Some of the settlers residing in the illegal West Bank outpost of Migron began packing and leaving the outpost in the early hours this morning, ahead of the court mandated eviction set for Tuesday.

The mishpachos leaving will head to their new homes in the West Bank settlement of Ofra. The settlers have pledge only peaceful resistance to the eviction and security sources do not expect any violent clashes later in the week, reports Yediot Achronot.

The Central Control Unit arrived at the outpost this morning with the official court writs ordering the eviction and GOC Central Command Maj.-Gen Nitzan Alon arrived in the outpost to personally supervise the eviction process. Several dozen teens, who reside in nearby outposts, arrived at Migron and confronted Border Guard officers securing the area, in protest of the eviction.

Border Guard forces have been deployed across the roads leading to Migron, in order to prevent any extreme elements from furher fanning the flames.

A statement issued by the settlers and published by Yediot Achronot read as follows: “This week, the forces of destruction sent by Netanyahu, Begin and Ya’alon, will rise on Migron to destroy it. The residents of Migron feel betrayed and pained by this move, and protest the miserable, unnecessary devastation about to happen here. The residents of Migron never have, and never will, cooperate with the razing of their community. We call on everyone to protest and decry the terrible destruction condoned by the Likud government. To all those who seek to harm us, we say: We will not break and we will not yield. Today everyone already knows – the story of Migron will end with at least two new communities.” 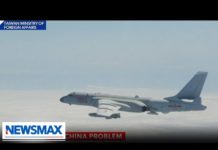 Watch: Gordon Chang: All Of Our Cities Are Now At Risk From China

Fauci: Vaccines For Kids Ages 5 To 11 Likely Available In November

Democrats Ready To Put A Wrap On Dragged-Out Talks