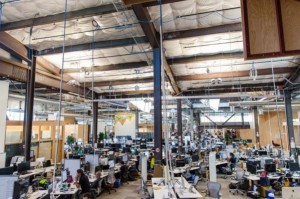 Deep inside Facebook’s massive new headquarters, the largest open-office workspace in the world, a rough-hewn building that feels like the idea economy’s take on the industrial factory floor, sits the desk of Lindsay Russell.

The desk is a white slab, 5-feet long, no drawers. The top has room for her laptop, computer monitor and a few knickknacks. Russell, a brand strategist, also has an office chair and small file cabinet. That’s it. No coat rack. No office phone. Her just-delivered dry cleaning, handled by Facebook, hangs by its metal hangers from the desk’s lip. There are no cubicle walls. No partitions. Her desk sits cheek to jowl in a pod with five other desks, a scene repeated across the cavernous Frank Gehry-designed space filled with 2,800 Facebook employees.

Even chief executive Mark Zuckerberg sits out in the open at one of those simple white desks. An office is not one of perks to being the billionaire founder of one of Silicon Valley’s most important companies.

Need privacy? Small meeting rooms are scattered all over. Or slip on headphones.

“That’s the hack for not having office doors,” Russell, 31, said.

Walking into Facebook’s new headquarters can feel like entering the office of the future – open, fluid and informal. It’s a place where change seems like a given, and the management structure implied by corner offices is a relic. The building stands out as an extreme example of how Silicon Valley firms intend to change the nature of work through more than software alone. And it goes beyond ballyhooed perks such as massages, ping pong and three meals a day.

Still, this future of work will not be welcomed by everyone. Open offices are contentious, despite nearly 70% of U.S. workers now reporting for duty in one. Although the trend has been growing for more than a decade, according to the International Facilities Management Association, studies have reported that some people find them noisy and distracting, even a drain on morale. And this is true despite most open offices still featuring low-wall cubicles.

What Facebook implemented goes a step further and, for now, remains rare: No walls inside an entire building engineered to facilitate a new way of doing work. Other major Silicon Valley firms such as Apple and Google are planning futuristic workplaces, too.

Facebook’s headquarters opened earlier this year. It is known as Building 20. The 430,000 square-foot structure sits on a 22-acre site just across a highway from Facebook’s existing campus, which originally had been built for Sun Microsystems. Building 20 was the first that Facebook built from scratch.

The waiting area of Building 20. Photo by Nick Otto/For The Washington Post
The design reflects Facebook’s emphasis on openness and transparency. It is set up to encourage collaboration and speed. Natural light pours in through skylights and massive windows as if to point out the passing of time. Building 20’s unfinished look – exposed steel girders, concrete floors and wires dangling from the soaring ceiling to desks below — recalls a fledgling startup instead of the world’s largest online social network, with 1.5 billion monthly active users worldwide.

“It’s intended to be a symbol of what we believe at Facebook, which is that our work is unfinished,” said Lori Goler, vice president of people.

The lack of offices for Zuckerberg and the rest of his management team is seen by many Facebook employees as proof of the company’s openness. They don’t even occupy the best office real estate, such as near the soaring windows with stunning views of nearby salt marshes.

But navigating a single room that stretches 1,500 feet long and includes thousands of coworkers can be a challenge. So Facebook installed Wayfinders, touch screens running in-house software that allows you to find any desk.

And the dozens of small meeting rooms are organized into whimsically-named neighborhoods, such as music festivals or media mash-ups. So a worker knows that the room called “13 Going on 30 Rock” is near “Clockwork Orange is the new Black.”

Offices can be used by anyone inside Facebook’s new campus. Photo by Nick Otto For The Washington Post
“It’s a really great organizational aid,” said Stefancik, the engineering director. “I depend on it.”

Stefancik worked in traditional offices before coming to Facebook. Once he even had an office with a door – something that today sounds like the retirement gold watch or the three-martini lunch. But he said he prefers the open layout. He can overhear conversations and make unexpected connections with coworkers.

“Before, people would close their door and you’d feel this real barrier to talking to them,” Stefancik said.

“You’ve got to use the open floor plan to your advantage,” said Jose Padilla, 27, who works in finance.

Padilla said he can hold meetings on the fly. And if he’s discussing something sensitive, such as financial data, he can grab a small private room.

Russell also started her career in a traditional office. She had a cubicle on Wall Street. Ideas at the investment banking firm had to be worked up the ladder. The process was rigid and slow. At Facebook, the office layout encourages group projects.

There is less focus on any worker’s individual space.

The desks lack dividers, so there’s no place to push-pin photos, conference badges or Dilbert cartoons. You can’t hang a family photo calendar. But photos are for posting to Facebook or Instagram. Calendars are synched online, with reminders sent to your cell phone. There’s no need for a drawer to stash afternoon snacks or diet sodas because treats are provided for free. And forget walls to hang your framed degrees – they don’t matter. The guy who started Facebook never finished Harvard.

“No one has a swanky office setup,” Russell said. “The equipment is there to help you move fast and do good work. That’s it.”

The result is an unexpected freedom to focus on work.

“I’m not as tied to my desk,” Russell said. “I can’t imagine being in any other work environment.”

This isn’t an ordinary park. It’s the top of Building 20. Photo by Nick Otto For The Washington Post
Building 20 also features a nine-acre rooftop garden, complete with mature trees and rolling hills of grass. Two laps around the meandering gravel path takes about 30 minutes, perfect for Silicon Valley’s famed walking meetings or an employee’s weekly one-on-one meeting with her manager.

Russell recently walked through the office, past rows of desks and walls plastered with posters and handwritten messages meant to evoke an urban scene.

“It feels organic and intentional at the same time,” she said.

She stopped to point out where Zuckerberg and Facebook’s chief operating officer Sheryl Sandberg sit. Zuckerberg was out. But Sandberg was holding a meeting in a glass-walled room near her simple desk. The meeting room is one of the few office perks for being a corporate leader.

But Russell or any of the other 2,800 workers could watch it all.