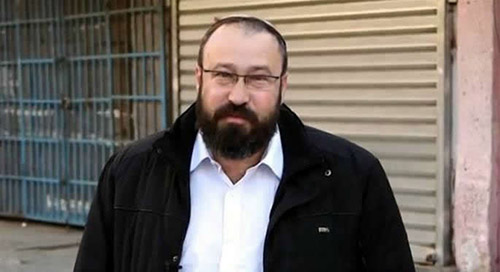 The Palestinian Authority’s ruling party, Fatah, has celebrated the terrorist who killed two Israelis and wounded a third in the West Bank on Sunday as a “perfect person” and a “heroic Martyr.”

Omar Abu Laila stabbed IDF soldier Gal Keidan to death at the Ariel junction, then stole his weapon and opened fire on passing cars. The driver of one vehicle, Rabbi Achiad Ettinger (pictured above), was mortally wounded and died the next day. Laila then drove to a nearby junction, where he shot soldier Alex Dvorsky, who remains hospitalized, though his condition has improved. Laila was killed in a firefight with Israeli soldiers after being located on Tuesday night.

According to a translation by Palestinian Media Watch, Fatah’s official Facebook page displayed several posts praising Laila as a hero. One read, “The Martyr (Shahid) represents the moment of transcending these blind instincts, as he stands firm before death and transcends the conditioned reflexes — then the perfect person is realized within him, to whom we give a military salute.”

Another post read, “Martyr (Shahid) Omar Abu Laila from the town of Al-Zawiya, the one who carried out the Salfit operation. Glory and eternity to the Martyrs.”

Fatah’s youth movement Shabiba also lionized Laila, quoting a verse from the Quran that states, “And never think of those who have been killed in the cause of Allah as dead. Rather, they are alive with their Lord, receiving provision.” It referred to Laila as a “heroic Martyr,” and declared, “Glory to the Martyrs who are more honorable than all of us.”

Another Shabiba post referred to Laila as having “carried out the operation of heroism.”

A local branch of Fatah from Laila’s home district of Salfit called the terrorist the “Rambo of Palestine” and a “self-sacrificing fighter.” It said of the IDF manhunt, “All of these wild dogs pursued a Fatah lion cub, not yet 20 years old, for about three days. He frightened them, shocked them, crushed their terrorist security system, and destroyed their fragile myth [of Israel’s strength]. Then his pure soul ascended to Heaven as a Martyr (Shahid) from the missiles and bullets of these murderers, who murdered him in cold blood this evening.”

In addition, Fatah Revolutionary Council member Muhammad Al-Laham extolled Laila on television, along with another terrorist, Ashraf Naalwa, who killed two Israelis last year. “We need to tell our people about Ashraf Na’alwa, to tell it about the guy from Salfit yesterday, how he humiliated the occupation and its intelligence [service],” Al-Laham said. “These are the role models, the role models for the children who are resisting the occupation.”