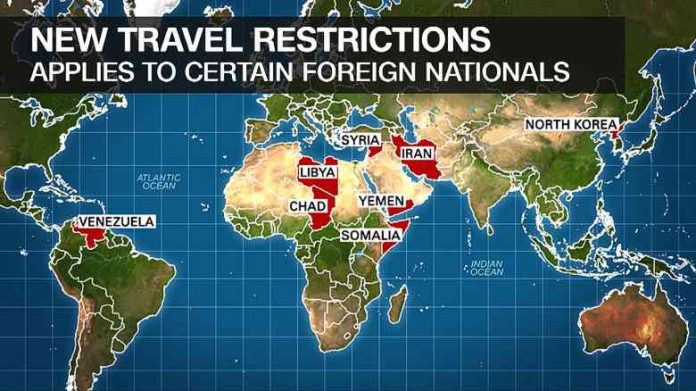 A federal judge on Tuesday largely blocked the Trump administration from implementing the latest version of the president’s controversial travel ban, setting up yet another legal showdown on the extent of the executive branch’s powers when it comes to setting immigration policy.

The decision from Judge Derrick Watson in Hawaii is sure to be appealed, but for now, it means that the administration cannot restrict the entry of travelers from six of the eight countries that officials said were either unable or unwilling to provide information the U.S. wanted to vet their citizens.

Trump had been blocked by courts from imposing his last two versions of the travel ban, but the ultimate question of whether he ever had the authority to do so remains somewhat murky.

The Supreme Court had been scheduled to hear arguments on his second travel ban, inked in March, which barred the entry of citizens from six Muslim majority countries and refugees from everywhere. But a key portion of that ban expired and Trump issued his latest ban before the hearing.

That prompted the justices to remove oral arguments from the calendar. They later dismissed one of the challenges to the March version of the ban.

Meanwhile, the State of Hawaii, the International Refugee Assistance Project and others who had sued over the March travel ban asked judges to block the new one. They argued that Trump had exceeded his legal authority to set immigration policy, and the latest measure – like the last two – fulfilled his unconstitutional campaign promise to implement a Muslim ban.

“The ban, like its predecessors, delivers on the President’s longstanding promise to exclude Muslims from the United States, striking at the very core of our Nation’s founding values of religious freedom and equality,” those suing in a separate case in federal court in Maryland wrote. “Unlike its predecessors, the new ban is indefinite, and potentially permanent.”

Legal analysts have said those challenging the latest travel ban face an uphill battle. The measure was only put into effect after an extensive process in which the U.S. negotiated with other countries for information, and the list of countries affected now includes two countries that are not Muslim-majority: Venezuela and North Korea.

Challengers to the ban argue, though, that the additions are mainly symbolic: the ban only affects certain government officials from Venezuela, and very few people actually travel to the U.S. from North Korea each year. They note Trump himself promised a “larger, tougher, and more specific” ban – meaning the new version would have the same legal problems as the prior iterations.

Some countries ultimately faced more complete bans than others, and the U.S. indicated they would make their way off the list if conditions changed.