The world’s first truly dual-screen laptop, which will allow computer users to multi-task while on the move, is due to go on sale by the end of the year. The pioneering PC, known as the Spacebook, is the brainchild of Alaska-based technology firm gScreen.

While growing numbers of office workers – especially in the financial industries – use several desktop monitors to track many programs and information sources at the same time, no manufacturer has yet released a portable equivalent.

The first photos of the pioneering gadget have been obtained by Gizmodo, the US technology website. 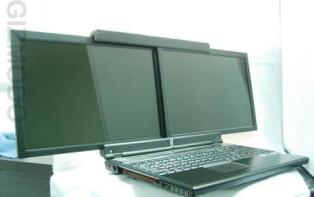 Gordon Stewart, the founder of gScreen, told the website that the first Spacebooks should be available on Amazon by December this year, once final modifications are complete.

“We designed this knowing that many may not need the extra screen at all times,” he said.

The dual-screen laptop is aimed at professional video editors, photographers and designers who need to flick between different applications to carry out their work.

But anyone willing to meet the expected $3,000 price tag should be warned that the double screen is likely to push the weight of the Spacebook significantly above standard laptops. The energy demands of running two monitors will also prove a drain on the computer’s batteries.

Other technology firms have produced laptops with smaller bolt-on second screens, but this is believed to be the first model with twin monitors of equal size.