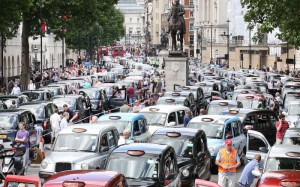 You better not be in a hurry in London. On Wednesday, taxi drivers launched a go-slow protest against Uber, because it uses unlicensed drivers. Licensed black cabs drove painfully slow around Trafalgar Square, causing a massive traffic jam.

The cabbies say they must go through four to seven years of training to become licensed and resent Uber drivers’ lack of training. “We are not objecting to competition,” said cabbie Ian Bettlestone of the Rail, Maritime and Transport Union. “We have to jump through hoops to be regulated and we don’t feel people involved in these new apps are being subjected to the same regulations.” Read more.