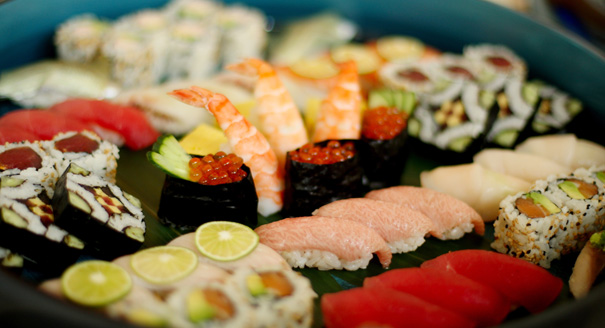 Eli walked into Glatt Smart and ordered a large assortment of salads, dips, and kugels for Shabbos. After taking his packages, he began to walk out, when he was stopped by Mr. Perlman, the owner of the store. Mr. P. said to him, “Sir, please excuse me, but you forgot to pay.”

Eli replied emphatically, “Oh, I don’t plan on paying. Last week, I bought chopped liver here, and my wife and I and everyone else who ate the liver became sick with food poisoning. Not only were my children home from school for a few days, but even worse, I could not go to work for several days and I lost four days’ worth of wages. That is aside from the medical bills we were swamped with. So first of all, I’d like a refund for last week’s chopped liver. But aside from that, I expect you to compensate for all of the losses and expenses incurred on account of this catastrophe. And that is why I’m going to be taking this week’s order for free— for starters.”

Mr. Perlman was a bit taken aback; he had not been notified until this point about what had gone on in Eli’s house. But first he had to get the facts straight. When he asked Eli when he had purchased the liver, Eli told him that he had bought it on Wednesday morning for Shabbos. Mr. P. insisted that on Wednesday morning, the liver was still good and Eli agreed that this was the case. Nevertheless, by the time Shabbos came around, it was already spoiled.

Does Eli have a claim here of mekach ta’us – a mistaken sale? Or do we say that if the food was fine at the time of purchase, then it is not Mr. P’s problem that the liver was spoiled by the time Eli and his family ate it? This would follow the ruleof nistachpah sadeihu, which means that it was the field of the customer that was ruined; in this case, it would mean that it was Eli’s food that became spoiled and it is his tough luck, since at the time of the sale there was nothing wrong with the food.

The Gemara tells us1 that if someone sells wine to his friend and then it became sour, the seller is not responsible. But if this person’s wine always turns sour and the buyer is not aware of this at the time of the sale, then this is considered a mekach ta’us and the buyer can ask for his money back. However, if the seller says that he is selling a spiced wine, which is supposed to last longer, then he has to make sure that the wine will last as long as he says. We see that each type of wine has a different shelf life.

The Maharsham2discusses a similar situation, but regarding apples. Mr. B. purchased a barrel full of apples from Mr. A., which he planned to sell little by little. Mr. A. knew that Mr. B. planned on reselling these apples slowly. But before Mr. B. had a chance to sell them all, some of the apples had become rotten.

Do we say that they were fine at the time of sale, so it is too bad on Mr. B.? Or do we say that since Mr. A. knew that Mr. B. was planning on reselling them slowly, then he is obligated to stand behind the apples until they are all resold?

The Mechaber cites this Halachah in the Shulchan Aruch3 and adds that whenever there is an expected shelf life for specific items within a country, then that is the custom that prevails.4 For example, we follow the government guidelines given for the life of a container of milk. If the milk we bought is no longer fresh before the date stamped on top, then we can return it for a refund.

According to the Maharsham,5however, you cannot compare wine to apples. This is because the nature of wine is that it becomes better with age. Thus, if a person bought some wine to save for Yom Tov, expecting it not only to still taste good but to be even better, and instead it turns sour, that would be an indication that there was something wrong with it to begin with. Regarding apples, however, even if they are no longer good when Mr. B. wants to resell them, that does not serve as proof that they were not good apples when they were sold. Thus, there is a possibility that the concept ofnistachpah sadeihu would apply here, meaning that the apples became spoiled later on and that Mr. B. has no recourse.

Each situation must be judged separately, to determine when the spoilage began. The general custom is that if a person buys Shabbos takeout at the end of the week, then it would be expected to still be good on Shabbos. If it was spoiled when he ate it on Shabbos, this may be a sign that there was already something wrong with the item when the purchase took place, and it was on its way to becoming spoiled, constituting a mekach ta’us. Only if Mr. P. can prove that the liver was perfectly fine at the time of sale and not on its way to becoming spoiled, would it be a case of nistachpah sadeihu and not his problem. Since the minhag hamedinah is that such food is expected to last through Shabbos, then the sale of the spoiled liver was a mekach ta’us.

It seems that this situation would fall into the category of grama be’nezikin, a cause of damage where the one who caused the damage is not responsible: Because it has been determined that the transaction was a mekach ta’us, according to halachah the food eaten by Eli and his family still belonged to Mr. Perlman; however, the fact that they ate the food and they suffered because of it is only a grama. 6

When Eli goes into Mr. Perlman’s takeout store and takes several bags full of merchandise without paying, this is called tefisah, seizing, where the person takes possession on his own. This brings up the question: Since we cannot rely on beis din to extract the payment, is this kind of grabbing within the parameters of Halachah? 7

NO CONFISCATION WITHOUT OBLIGATION

The answer is no. The Meiri8 brings downs many different levels of grama, and explains that the one who caused the damage has a Heavenly obligation to pay for the damages — only if he intentionally caused the damage. Even if this situation would be considered a grama, and it would be indirectly connected to Mr. Perlman, since this was obviously unintentional, he has no obligation to compensate Eli for his additional losses.

Therefore, aside for the refund for the actual chopped liver, Eli is not entitled to any other compensation, and he is certainly not allowed to take home bags of food without paying.

4 Hakol ke’minhag hamedinah. If no formal agreement was made in this regard, then we follow the rule of the country.

6 It’s not a garmi, which is a damage that is more direct than a grama, but not as if the person caused the damage by hand. Nevertheless, in the case of garmi, the person would be required to compensate.

7 The Ketzos HaChoshen (28) brings down a Rivash, which discusses the machlokes of whether or not such a tefisah would work. But this does not apply in our case.