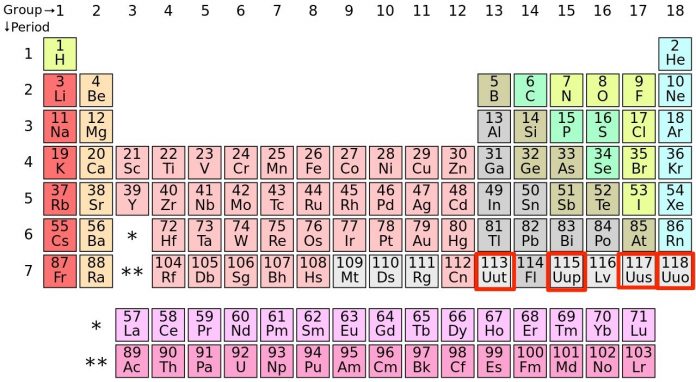 Oh, hello, oganesson. The International Union of Pure and Applied Chemistry, the century-old organization charged with maintaining the periodic table, finally announced it had approved the names of four new elements. These monikers, attached to new heavy elements, were the result of an almost year-long process.

In December 2015, IUPAC made the first of several broadcasts: Four elements, numbered 113, 115, 117 and 118, met the criteria for inclusion in the periodic table. The seventh, bottom row of the periodic table was complete. In June, IUPAC announced the tentative names. And on Nov. 28, after a five-month waiting period during which IUPAC accepted public comments, the organization released an updated periodic table. The June names had passed muster, and are set to be ratified at the organization’s meeting in July 2017.

To be clear, the general public never had a shot at naming the elements directly, sparing everyone the whimsy of Elementally McElementalface-ium. (And, fitting as a literal heavy metal tribute to Motörhead musician Lemmy Kilmister would be, lemmium’s Change.org petition did not pan out.)

Still, a few people tried to sway IUPAC. “Overall, it was a real pleasure to realize that so many people are interested in the naming of the new elements, including high-school students, making essays about possible names and telling how proud they were to have been able to participate in the discussions,” Jan Reedijk, president of IUPAC’s Inorganic Chemistry Division, said in a statement Wednesday. “For now, we can all cherish our periodic table completed down to the seventh row.”

From the official IUPAC announcement, the elements are:

– Moscovium and symbol Mc, for the element 115;

– Tennessine and symbol Ts, for the element 117; and

– Oganesson and symbol Og, for the element 118.

In keeping with IUPAC standards, the scientists who discovered the elements proposed the accepted names. There are some ground rules: the names must refer to a scientist, mythology, substance, elemental property or place. Three of the names – Tennessine (Tennessee), Nihonium (Japan) and Moscovium (Moscow) – reflect where the scientists’ institutions were located, as The Washington Post reported in June. Oganesson is in honor of Yuri Oganessian, a nuclear physics professor at the Joint Institute for Nuclear Research.

Nihonium was the first element to be given a name with Japanese origin. “The periodic table is a great legacy in chemistry. I’m filled with deep emotion that there is an element with a Japanese name,” Kyushu University chemist Kosuke Morita, who led the discovery of nihonium, said in a conference on Thursday according to the Japan Times.

With large numbers of protons in their nuclei – nihonium, as its atomic number indicates, has 113 protons – the elements are considered superheavy and unstable. They exist only in laboratories for a few fractions of a second. Nihonium was first synthesized in 2004, by bashing zinc ions with the element bismuth. It took years of work for the Japanese researchers to confirm its existence, recreating the element in 2005 and again in 2012. 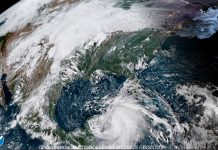