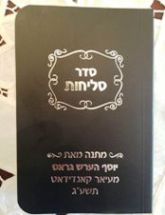 Yosef Hirsh Gross, a Spring Valley, NY, trustee and mayor candidate in the upcoming Democratic primary, handed out Selichos for chassidishe voters in the Village. portions of Selichos are recited every morning in the days before Rosh Hashanah until Yom Kippur.

This year, the first day of Slichos is Sunday, a mere ten days before the primary.

Gross is facing off against a handful of other candidates in a Village that has 1,300 Orthodox/chassidishe voters, most of which are registered Democrats.