Benny Gantz and Moshe Ya’alon are expected to announce next week that their two parties will run for the Knesset together as one list, Kan 11 News reported on Friday evening.

According to the report, the two are hoping to join forces with other political figures in the future. It was also reported that Ya’alon, who intends to replace Prime Minister Binyamin Netanyahu, has no intention of being part of a coalition headed by Netanyahu.

Gantz officially registered his new party on Thursday, and it will be called Chosen Leyisrael. 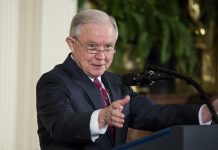