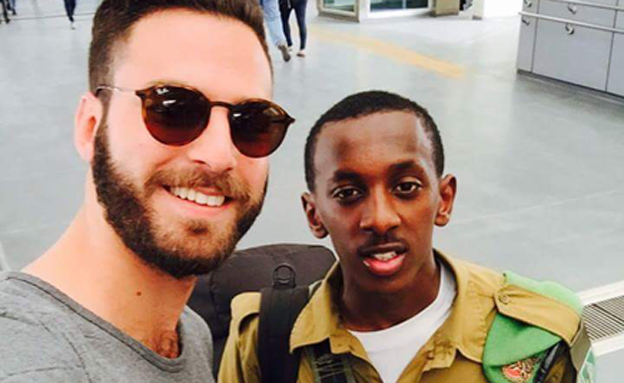 After last month’s incident in which a “good Samaritan” on an Israeli train came to the aid of a female IDF soldier in distress by paying her electricity bill, another such stranger came forth with cash for a lone soldier in debt, Israel’s Channel 2 reported on Tuesday.

The soldier, identified simply as “Yitzhak,” posted the story on Facebook, and – as was the case with the previous incident – it was widely circulated. In the post, Yitzhak described how his financial woes began five months earlier.

“I got into debt with [mobile phone company] Pelephone, and when I couldn’t pay, the debt grew by another NIS 3,800 [$976],” he wrote, recounting, “I went to take the train, and I happened to meet a French guy named Samuel Levy. We started talking — just a regular chat between strangers.”

While the two were exchanging pleasantries, Yitzhak received a phone call from Pelephone’s lawyer, informing him that his debt had ballooned. When the conversation began to grow heated – as a lien was put on Yitzhak’s bank account — Levy decided to take the phone and immediately pay NIS 1,500 [$385] of the bill.

Yitzhak wrote that after hugging Levy, he asked what he could do to thank him properly.

“He told me, ‘Keep serving your country, lay tefellin [phylacteries] and honor your parents. I love you [soldiers] and I want to thank you for protecting us,’” Yitzhak described Levy’s response.

“I don’t know what words to use to thank him; he fell down from heaven,” Yitzhak told Channel 2 on Monday, adding that following Levy’s act of generosity, the bank told him the lien on his account would be removed.

“I was also a lone soldier — from France — a combat soldier,” Levy told Channel 2. “I still feel like a soldier, no matter what. I don’t want the soldiers who protect us every day to suffer hardships in life, so they can have a clear head to focus on doing their job.”