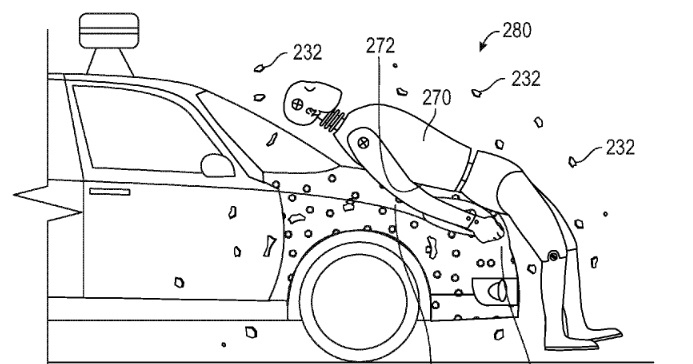 Google has been granted a patent for an adhesive vehicle front that’s designed to limit the injuries of a pedestrian it strikes.

A pedestrian struck by a vehicle with the adhesive front end would become stuck to the hood and bumper. The idea is to prevent a secondary blow in which the pedestrian might strike the windshield, roof or road after an initial collision with the car’s front.

With fewer impacts, pedestrians should suffer fewer injuries. But there’s one catch – they will end up covered in an adhesive substance.

The Google patent granted this month describes the adhesive coating as being present beneath an outer egg-like shell that would break in the event of a collision with a pedestrian or another object. Some automotive and pedestrian experts contacted for this story wondered whether the adhesive would be effective at a range of vehicle speeds. A Google spokeswoman declined to offer more details on the patent and noted that product announcements should not necessarily be inferred from patents.

“It sounds wacky to me, but who am I to say?” said Bill Visnic, the editorial director of mobility media at the Society of Automotive Engineers. He’s followed the car industry for 25 years and said he’s never seen anything like this. “It’s not something that’s beyond the pale of imagination as having some potential to help.”

Visnic noted that some automotive innovations initially seem crazy but end up being valuable. For example, pyrotechnic hoods pop away from a car’s engine during a pedestrian collision. This creates a crumble zone that absorbs some of the impact and lessens the blow a pedestrian would feel.

Pedestrian safety has become a hot topic, and automakers are looking for ways to design their vehicles to protect not just humans on the inside, according to Visnic. In December, the National Highway Traffic Safety Administration announced plans to expand its safety ratings to assess how well a vehicle protects pedestrians in the event of an accident.

The patent’s authors write that existing car bumpers are generally designed to absorb energy to protect the vehicle but provide little protection for a pedestrian. The thinking echoes that of pedestrian advocates who believe the government and auto industry still aren’t doing enough to protect pedestrians. They recommend following Europe, which is considered more proactive on pedestrian safety.

“It’s really exciting to see a vehicle maker start thinking about the people around the vehicle and outside the vehicle, and not just the safety of those in vehicles,” said Nicole Ferrara, executive director of Walk San Francisco.
(c) 2016, The Washington Post · Matt McFarland