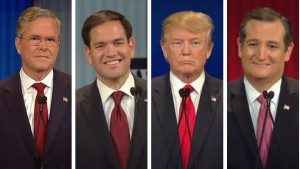 The fourth Republican debate on Tuesday night was a less dramatic, more substantive affair than the previous three clashes. Who shone and who wilted under the lights in Milwaukee?

On a night without any single standout moment, the polish and poise of the two senators were valuable assets.

Rubio is probably the most charismatic figure in this year’s GOP field, at least among those who hold public office. Some of his best moments Tuesday night were on very divergent topics, including college education and foreign policy.
In the debate’s closing stages, he displayed a nice lightness of touch when co-moderator Maria Bartiromo delivered a lengthy and positive summary of Hillary Clinton’s resumé, to the consternation of the Republican crowd. Instead of answering how someone with his relative lack of experience could compete with Clinton, Rubio merely laughed and said wryly that she had asked a good question.

Cruz had delivered an especially strong performance in the most recent GOP debate in Boulder, Colo., on Oct 28, and he kept the momentum going here. His responses on entitlement reform and the need to avoid bailing out the financial system were fluent and clear.

Cruz did have an uncharacteristic misstep when, having stated he would get rid of five government departments, he in fact named only four. Cruz cited the Department of Commerce twice, but his stumble was immeasurably less damaging than then-Texas Gov. Rick Perry’s infamous “oops” moment, on the same subject, in 2012.

Paul has seemed at best a marginal figure in previous debates but he came alive in Milwaukee. He hit early on his distrust of the Federal Reserve, an article of faith for the libertarians who backed the presidential bids of his father, former Rep. Ron Paul (R-Texas).

He also went after Rubio on the Floridian’s plans for a new tax credit and then expanded that critique to attack his proposals to increase military spending as well. That clash had no clear winner or loser but Paul held his own. His strong performance will hardly transform him into a front-runner but the improvement from his previous showings was notable nonetheless.

The debate hosts were always likely to avoid the fate of CNBC, which found itself in a firestorm after the Colorado debate, accused of asking “gotcha” questions and adopting a generally querulous tone. By contrast, Tuesday’s debate was smoothly-run and substantive, with the three moderators being neither spineless nor gratuitously rude. The ratings have yet to be revealed but Fox Business will surely win critical praise for how it ran the show.

After Fox Business decided that only eight contenders would be present on the main stage on Tuesday, Christie found himself confined to the earlier, undercard debate. If that hurt his pride, it didn’t show. The New Jersey governor was clearly the best performer of the four candidates in the earlier clash, the others being Louisiana Gov. Bobby Jindal, former Arkansas Gov. Mike Huckabee and former Sen. Rick Santorum (Pa.). In particular, Christie turned Jindal’s attacks on his conservative credentials to his advantage, positioning himself as a would-be uniter of the party and Jindal as a petty divider.

This was Bush’s best performance in any of the debates so far. Unfortunately for him, that’s a rather low bar.

He did get two effective lines in early, both of which alluded to Hillary Clinton, the Democratic front-runner: One mocked her sunny assessment of President Obama’s economic record. The other was his insistence that Clinton’s campaign would be “doing high-fives right now” after listening to Donald Trump re-state his hard line on illegal immigration.

But there were two big problems for Bush. He was marginal for much of the debate (18 minutes passed at the start before he got asked a single question, something he pointed out in a moment of assertiveness not seen in the previous debates) and there was no outstanding moment that seemed likely to reinvigorate his ailing campaign.

Carson’s low-wattage style has both fans and detractors but he is clearly sticking with it. His best moment in the debate came early on when he wryly deflected a question about the media coverage he has received in recent weeks. But Carson can also come across as meandering. Additionally, he ruled out raising the minimum wage, despite having indicated back in May that he supports such a move. That could prove to spark yet another controversy in a campaign that, for all its strengths, doesn’t need any more of them.

It was more of the same from the former Hewlett Packard CEO. She is a very effective communicator who wraps many of her policy positions in the same overarching theme: that vested interests control the political system and that she is the person to take them on. But the suspicion lingers that Fiorina had her moment in the sun after the second GOP debate back in September. She has faded since then, and there’s no real reason to believe she can reverse that trend.

This was the mogul’s weakest performance in any of the four debates. No single disaster befell him, but he had a couple of bad moments. One came when he complained intemperately about Fiorina interrupting people, in the process reminding people of a previous furor when he appeared to criticize her looks. The other came when, asked about the threat from Russia, he delivered an answer that was conspicuously lacking in detail. Still, Trump remains — at worst — the co-frontrunner alongside Carson, despite endless predictions of his imminent demise. Don’t be surprised if his poll ratings prove durable one more time.

Kasich needed a big night and he got one — but in all the wrong ways. Kasich tried to mix it up with several candidates and almost always emerged the loser. Early on, he was slapped down by Trump. Much later, he tangled with Cruz on the wisdom or otherwise of bailing out troubled banks. At one point during that exchange, Kasich appeared to suggest he would let people who could afford to lose their deposits do so, while coming to the aid of those who could not bear such a loss. Such moments undercut Kasich’s central claim as a pragmatic executive. It was a very bad night for Kasich, and deeper questions are now likely to be asked about the viability of his candidacy.