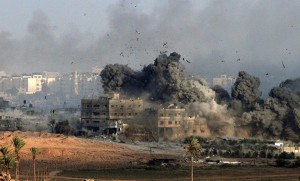 If you’ve been following the conflict in Gaza you’ve seen dramatic pictures of heavily armed Israeli soldiers, their tanks and helicopters. You’ve seen pictures of neighborhoods reduced to rubble, with Palestinian men, women and children in desperate circumstances. What you almost certainly have not seen are the combatants Israelis have been fighting. It’s as though they were fighting ghosts.

Also scarce in the major media: stories about Hamas deploying civilians as human shields, storing missiles in mosques and UN schools, setting up command posts in hospitals, using ambulances to ferry terrorists to battle, and children to dig tunnels — with at least 160 killed in the process. And how many stories have you seen about humanitarian supplies flowing from Israel to Gaza in the midst of this bloody conflict and the hundreds of Gazans treated in Israeli hospitals?

The explanation: Hamas restricts what journalists in Gaza may film, photograph and even write about. Hamas threatens and intimidates journalists who do not follow what might be called Hamas rules – rules designed to shape media coverage and influence perceptions around the world.

Let me say this as clearly as I know how: The journalists covering Gaza are brave. I’m not saying they should be braver – much less reckless. I do think they should be honest with their readers and viewers about the conditions under which they are operating:  conditions of coercion, manipulation, restriction and censorship.

A few have acknowledged their predicament, mostly on social media. For example, Italian journalist Gabriele Barbati on July 29 tweeted: “Out of #Gazafar from #Hamas retaliation: misfired rocket killed children [today] in Shati.” In other words: having left Gaza he can now say what he would not dare report while in the territory: that it was a Hamas rocket, not an Israeli rocket, that killed 10 people, 8 of them children, at the al Shati refugee camp along the northern Gaza seacoast.

Israeli filmmaker Michael Grynszpan wrote on Facebook that he had met with a Spanish journalist who had just left Gaza and asked him why TV viewers are not seeing Hamas fighters in action. Grynszpan said he was told: “It’s very simple, we did see Hamas people there launching rockets, they were close to our hotel, but if ever we dared pointing our camera on them they would simply shoot at us and kill us.”

An oped in The Australian noted that after TV reporter Peter Stefanovic tweeted that he had seen rockets fired into Israel from near his hotel, a pro-Hama tweeter warned: “in WWII spies got shot.” French-Palestinian journalist Radjaa Abu Dagga was “detained and interrogated by members of Hamas’s al-Qassam Brigade at a room in Shifa hospital next to the emergency room.” He published an account of his treatment in the French newspaper Liberation– but that article has since been “unpublished” at Dagga’s request.” Why do you suppose?

John Reed of the Financial Times was threatened after he tweeted about rockets being fired from near that same hospital. The Wall Street Journal‘s Nick Casey posted a photo of a Hamas spokesman being interviewed from a room in the hospital along with this tweet: “You have to wonder (with) the shelling how patients at Shifa hospital feel as Hamas uses it as a safe place to see media.”After “a flood of online threats,” the tweet was deleted. But Twitter accounts “continued to attack Casey, including him on lists of ‘journos in Gaza (who) lie/fabricate info for Israel’ and ‘must be sued for crimes.'”

Of course, litigation is the least of the perils weighing on the minds of journalists in Gaza. On any day, any foreign reporter could be abducted, handcuffed and hooded, while their captors reviewed their dispatches. If not satisfied with what they see, that could be all she wrote – literally.

Most reporters know that in 2006 Fox reporter Steve Centanni and cameraman Olaf Wiig were kidnapped in Gaza by a group calling themselves the Holy Jihad Brigades. Both were eventually released but not before, as Mr. Centanni stated, they were “forced to convert to Islam at gunpoint.”

Some reporters slant for other reasons. Last month, NBC News pulled correspondent Ayman Mohyeldi out of Gaza. Many inferred that his bosses found his coverage unbalanced. A few days later, after an outcry from Hamas sympathizers, NBC reinstated him.

Mohyeldi tweeted: “I’m returning to #Gaza to report. Proud of NBC’s continued commitment to cover the #Palestinian side of the story.” How to interpret that except as an admission that he covers only one side of the story? Can you imagine a reporter saying he was proud his media outlet was committed to covering “the Israeli side of the story”?

I would argue, too, that never questioning Hamas’ “facts” and casualty figures is not tantamount to telling the Palestinian side of the story. I would further argue that Hamas is not on the side of Palestinians – at least not those who want normal lives for their children and whose highest priority is not exterminating the Jewish state next door.

Finally, a few words on more subtle forms of journalistic bias: Early in the current round of fighting, reporters for The New York Times asked an Israeli military spokesman “about the repercussions of carrying out” operations against Hamas “during the Muslim holy month of Ramadan.”

If it occurred to these reporters to ask Hamas spokesmen about the “repercussions” of firing missiles at Jerusalem during Ramadan, I missed it.

I know: It would be foolhardy to pose such questions to a Hamas spokesman. I would just ask that principled journalists, once they are safely out of Gaza, tell the truth -not just on Twitter — about the pressures they faced and the way it influenced their reportage.