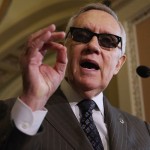 “I’m going to do everything in my power to make sure the deal stands,” he tells the Post in a telephone interview, according to Newsmax.

He’s the 27th Senate Democrat to come out in favor of the deal. Sens. Charles Schumer of New York and Bob Menendez of New Jersey have announced their opposition.

Reid, who represents Nevada, said the deal is the “best way” to curtail Iran’s military ambitions, and he pledged to round up more support to thwart its opponents.