The home of a Jewish family in Las Vegas was tagged with anti-Semitic graffiti in what she said was an anti-Semitic incident.

Sara Attia, a mother of three, said she called police after finding a swastika and the phrase “Heil Hitler” drawn on the door of her apartment Monday, the Las Vegas Review Journal reported Monday.

The incident happened days after several swastikas were discovered sprayed on the home of non-Jewish Las Vegas family. Police did not consider that incident a hate crime, saying it was more likely a random attack by teenagers, the Times of Israel said. 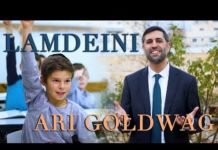