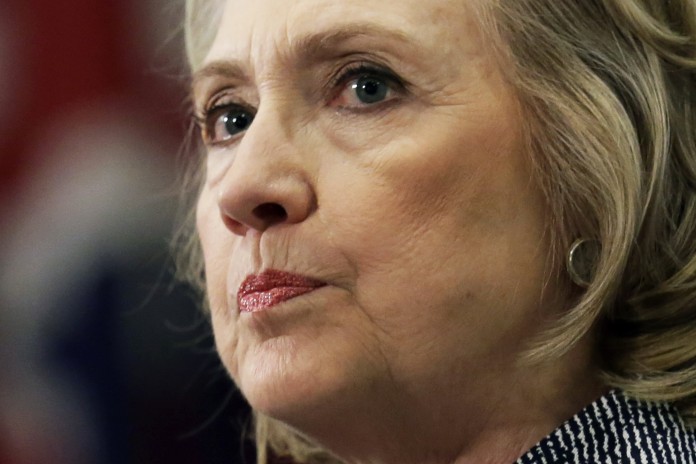 While addressing thousands of supporters at an NAACP dinner, she sharply contrasted President Obama’s White House — still incredibly popular among black Americans — with some of Trump’s recent missteps on race.

She mentioned Trump’s ties to the “insidious birther movement” and his initial struggle to disavow former Ku Klux Klan leader David Duke. (He later did, but not before a ton of criticism.)

Then she threw out this crowd pleaser, which received a standing ovation: “We cannot let Barack Obama’s legacy fall into Donald Trump’s hands.”

Clinton, who after a big win in four northeastern states Tuesday has an almost insurmountable delegate lead in the Democratic primary contest, is increasingly pivoting to general-election mode. As she does so, she appears to be testing different attacks on her potential rival, Trump.

And the past few weeks have demonstrated that she has a lot of material to pull from. She often criticizes his divisive rhetoric, but she also has zeroed in on his wealth and his comments about women.

In Delaware recently, she knocked him for his “country club” lifestyle and “big jet” campaign.

And in an interview that aired Sunday with CNN’s Jake Tapper, she responded directly to Trump’s recent accusation that she’s playing the “woman card:” “I have a lot of experience dealing with men who sometimes get off the reservation in the way they behave and how they speak,” she said.

In Detroit, she kept her criticism of Trump focused on race, while simultaneously casting herself as the candidate who understands and can address systemic racism.

“Imagine if white kids were 50 percent more likely to die from asthma than white kids,” she said. “Imagine if a white baby in parts of this country was twice as likely to die before her first birthday than a black baby. Imagine the country and resources that would flood in to save those children. These inequities are wrong, they’re immoral, they’re un-American, and they have to end.”

“I want you to know that I get it and I see it. And it’s important that we have this conversation. For many white Americans, it’s tempting to believe that systemic racism is largely behind us. But anyone asking for your vote has a responsibility to see things as they actually are, not as we wish them to be.”

The NAACP dinner was her first public event in Michigan since losing the state’s March 8 primary by a percentage and a half to Bernie Sanders, a shocking upset at the time, in part because exit polls suggest she underperformed among black voters in the state compared to her Deep South wins.

Attendee and Clinton supporter Shawn Thomas said he thought she struck the right tone Sunday in going after Trump, but he urged caution as she goes forward.

“Everybody who goes after Trump just gets dragged into the mud,” he said.

As is par for the course in Clinton’s new general-election mode, she mentioned Sanders exactly zero times in her public remarks Sunday.

Sanders, by contrast, is making direct pleas to elected officials and Democratic Party leaders to choose him over Clinton.

At a news conference Sunday in Washington, he urged superdelegates to “take a hard and objective look at which candidate stands the better chance of defeating Donald Trump.” Superdelegates, who can vote for whomever they want at Democrats’ convention in July, have indicated by overwhelming numbers they’re on Clinton’s side — 520 for her to Sanders’s 39, at least count. Sanders’s comments would seem to indicate he sees winning over their support as one of his best hopes to stay viable in this race. 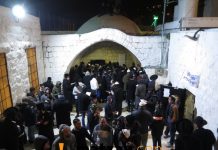