Big deals for both residential and income-producing properties can still be found in the frozen New York City real estate market. On the eve of Pesach 5769/2009, a particularly interesting Manhattan property is back on the market – the borough’s only matzoh factory.
Aron Streit Inc set up its factory at 148-152 Rivington Street on the Lower East Side in 1925. The company was founded by Aron and Nettie Streit, Austrian Jews who immigrated to New York in the 1890s. The company is still owned and run by their descendants at the site where Jewish immigrants congregated in the late 19th and early 20th centuries.Streit’s Matzos Factory is an iconic symbol with a real history, but it is apparently moving to New Jersey. Streit’s Matzos is the second leading matza brand in the US after Manischewitz. 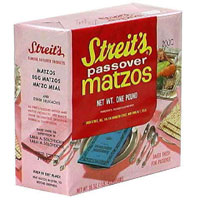 The 4,400-square meter property was first put on the market in November 2007 at an asking price of $25 million, and was pulled two months ago, when no buyers were found. The company is still asking the same price, but with a new real estate agent, with Halstead replacing Massey-Knackal.

The new listing calls the property “A package of four conjoined former tenement buildings that have been converted into a factory for the Streit’s Matzo Bakery.” It adds, “The size of the property makes it a prime residential conversion opportunity; a developer can have stores on the ground floor and different size apartments above. The corner exposure would give the apartments lots of sunlight in a great location. The property is also a prime user opportunity; the ground floor can be good for a gallery and the upper floors be used for community facility…”

In November 2007, Aron Streit manager Aron Gross said, “It’s hard to continue manufacturing in New York City. Traffic is too much for the company’s trucks, and we get complaints about noise from the steel ovens where the matza is made.”