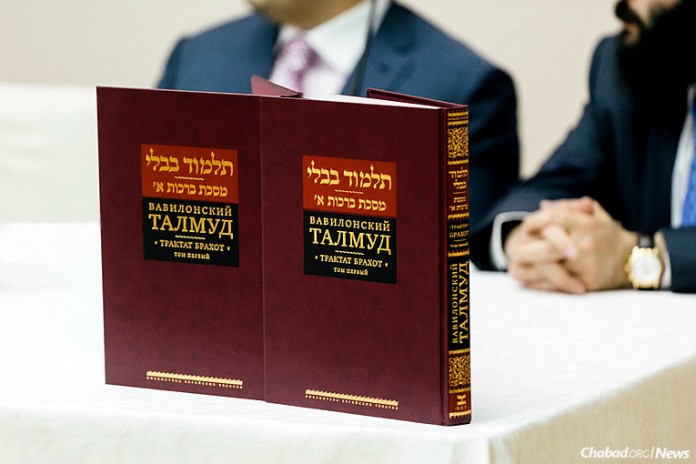 The 63 masechtos of Shas were not allowed to be printed in the Soviet Union even once during the 70 years of its existence. An amalgam of Aramaic and Hebrew, the ancient text contains the teachings and opinions of hundreds of rabbis on the widest variety of subjects, including Jewish law, ethics, philosophy, customs, history and lore. Now, with the publication of three initial volumes, a historic effort to translate the entire Talmud with commentaries into the Russian language has been launched in Moscow.

For more than 1,500 years, the Talmud has served as the central curriculum of Jewish education, studied by children sitting around a single volume in a one-room cheder, and white-bearded elders bent over a yellowing synagogue tome. Wherever Jews have found themselves, they have printed and studied the Talmud—the most famous and widely reproduced edition being that of Vilna’s Romm printing house, first published in the 1870s.

But the Bolsheviks wanted to silence the distinctive sing-song tune of talmudic learning that emanated from pre-Revolution Russian synagogues and schools, and so they banned it. In fact, they banned the printing of all Jewish religious texts. Until the 1980s, the last Chumash in Russia was printed in 1918 and the last volume of Torah scholarship in 1926—a slim commentary on Rambam written by the rabbi of Poltava.

Now, the monumental task of translating the Talmud’s 5,422 pages into Russian has been undertaken by the Knizhniki publishing house, which is affiliated with the Federation of Jewish Communities of Russia (FJC). When completed, it will be the first translation of the entire Talmud ever produced in Russian. Knizhniki has previously translated and published all six orders of the Mishnah, and is in the process of publishing Rambam’s entire Mishneh Torah as well.

“We started with this current project three years ago, working out how we envisioned the layout and how we wanted to do it,” says Rabbi Boruch Gorin, chief editor of Knizhniki. A concurrent effort had been started by Chabad Maor in St. Petersburg; Gorin found that their visions coincided, and so the two organizations decided to collaborate. The first half of Brachos was published in January; the second half came out in May; and Makkos was released in the beginning of August.

“We hope to release about four volumes a year,” says Gorin. “If all goes well, the entire Talmud will be published in Russian within 10 to 12 years.”

During the planning stages, critics suggested that it was a fool’s errand. If a Russian Jew was actually interested in the material, the reasoning went, they could learn Hebrew and Aramaic, and study in the original. Gorin says their Russian Talmud’s unexpected popularity and sales prove otherwise.

Gorin, who is also editor-in-chief of the Jewish literary magazine Lechaim, describes the Talmud’s translation as not only a religiously significant event for Russian Jewry, but a broader societal one as well. Soviet academic culture had a strong tradition of translating important texts from other cultures, and so for Gorin and the team working on this Talmud (the chief translator is Rabbi Reuven Piatigorsky), it has been important that the work be up to serious academic standards.

“We see a huge positive impact because of the high level of quality,” says Gorin. “There are a large number of people for whom this is intellectual and spiritual sustenance. When they did not have Jewish materials at this level, unfortunately, they looked elsewhere.”

Rabbi Berel Lazar, the chief rabbi of Russia, also heralded the newly published volumes: “This is an unprecedented project in the Russian-Jewish book publishing, and it is taking the development of Jewish life in Russia to a new stage.”

He adds that he hopes the new publication will enable “a deeper search for the truth” by all who study it. CHABAD.ORG