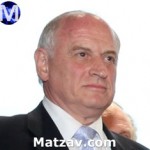 As Congress concludes its review of the Iran deal, Malcolm Hoenlein, executive vice chairman of the Conference of Presidents of Major American Jewish Organizations, said he hopes that “partisanship can now be put aside so we can work together to assure the best possible outcome,” the New York Jewish Week reports.

Discussing President Obama’s promise to provide Israel with advanced military weapons to ensure that it maintains its qualitative military edge in the region, Hoenlein said, “I think there has to be assistance to Israel because its security situation has changed, and all countries in the region are threatened” by Iran. He was referring to an estimated $56 billion Iran would receive once it complies with the terms of the agreement over the next six to nine months.

“If Iran is empowered and uses those funds to promote terrorism and violations of human rights, builds its missile capacity and makes aggressive efforts to undermine governments in the area like Yemen, as it has done in Iraq and Syria and along the Israeli border, those are things we will have to be looking at,” Hoenlein said.