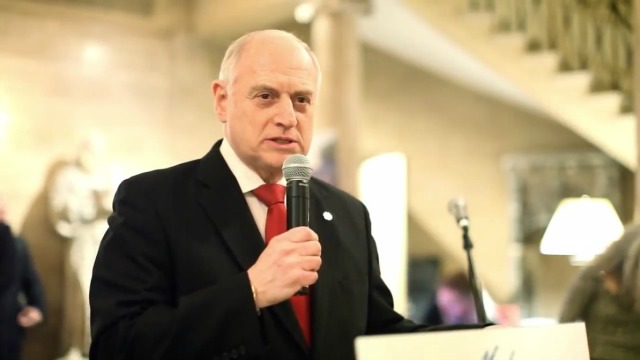 A top priority for US President Donald Trump and Israeli Prime Minister Benjamin Netanyahu at their White House meeting on Wednesday will be to show publicly that there has been a “reset” in the relationship between their two countries following the tensions that characterized the Obama era, a prominent American Jewish leader told The Algemeiner.

Speaking from Israel — during a trip whose itinerary also includes stops in Cyprus, Egypt and Morocco — Conference of Presidents of Major American Jewish Organizations Executive Vice Chairman Malcolm Hoenlein said, “The anticipation here about the prime minister’s visit [to Washington] is very great and we will see what actually happens when he gets there. I think that personal chemistry will be important, as will a mutual understanding about vital issues and intentions.”

“There is a recognition that there are a lot of key issues now in play that have to be addressed,” he stated. “Iran is a key issue, and I’m sure they’ll talk about the threats Iran poses and what can be done. The same is true about some of the other likely issues in regard to the region, like Syria, Russia’s role, international terrorism, etc. There is really a lot for them to talk about.”

“I hope, first of all, that they’ll work out an understanding as to how they will communicate and how to avoid surprises or misunderstandings that damage the relationship,” Hoenlein continued. “They’ll talk about what they see as common threats, in terms of radical Islam and Iran, and also about stabilizing Jordan and Egypt. I think there are so many issues on which the US and Israel have common vital interests. So it’s how you build on those and strengthen the special relationship. Any specific requests, I think, are secondary to establishing chemistry in the personal relationship, and, of course, mutual understanding on the substantive issues.”

Israelis, Hoenlein noted, have “many questions” about Trump “for most of which I don’t have good answers yet.”

“We’re telling them that they have to be patient and see what Trump’s policies and priorities are going to be,” he said. “The administration has only been in office a few weeks and many key posts have not been filled or are awaiting confirmation. We have to wait until they have a chance to really develop their policies and deal with the specifics.”

Regarding the potential move of the US Embassy in Israel from Tel Aviv to Jerusalem — a Trump campaign promise that seems to have been put on hold, at least temporarily — Hoenlein said, “I think the Jewish community as a whole would like to see Jerusalem recognized as the capital of Israel. That has been our position for decades. The question is how you go about it. Hopefully they will do it in a way that won’t arouse violence, because it doesn’t really change anything on the ground; it’s just righting a historic wrong.”

“I think [the Trump administration] may have to put a marker down for the Palestinians that they expect them not to engage in incitement and at the same time make clear that the status of the religious sites and other places are not going to change, because, in fact, they won’t,” he went on to say. “We know from the past how the immediate Palestinian response to every crisis is to claim, ‘Al-Aqsa is under siege’ to arouse public sentiment and violence.”

Looking ahead to the future of the Israeli-Palestinian peace process in the coming years, Hoenlein said, “The president has said he is committed to getting a deal. We’ll see what that means. Every president has wanted to do it, but he seems to be serious.”

The language of the recent White House statement on Israeli settlements, Hoenlein pointed out, was “reminiscent of the 2004 Bush-Sharon letter that was ignored and even negated [by the Obama administration] — which was not good, because if presidential commitments don’t mean anything, then everyone will disregard any commitment that is made.”

In Hoenlein’s view, the new sanctions targeting Iran that were recently announced by the US Treasury Department were “very important as a message” to the Tehran regime.

“I think the Iranians are beginning to react to the stronger messages they’ve been getting,” he stated. “It will also embolden our allies to know that the US will stand against Iran. For too long, Iran was able to act with impunity. They look for weakness and when they find it they exploit it. If we stand up to their threats, aggression and violations, they will back down, as they did when they removed a ballistic missile that was about to be launched [earlier this month].”

When it comes to broader American policy in the Middle East, “I think what’s important is Trump is showing that America is again engaging in the region,” Hoenlein said.

Back at home in the US, there are “obviously big differences within the Jewish community about some of the domestic issues that have been raised so far [since Trump’s inauguration],” Hoenlein acknowledged. “We have to make sure that whatever differences we have, we stay united and focused on the key issues and threats that we face.”

“Israel still enjoys strong bipartisan support, and we have to make sure that remains the case,” he continued. “We cannot take any sector of the American public and its elected leaders for granted. We need to work at it consistently and intelligently while remaining true to our commitments.”