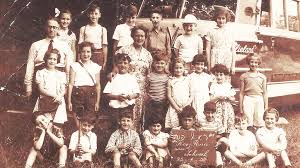 Israeli writer Miriam Dubi-Gazan visited the Amsterdam cellar where she was born at the end of World War II. As a newborn, she was registered as the daughter of a Nazi collaborator without his knowledge by the Nazi’s brother who was a member of the Dutch resistance.

While at least 75% of the country’s Jews were murdered during the Holocaust — the highest rate in occupied Western Europe – there were significant acts of disobedience on a scale unmatched by any other country in Western Europe.

The ideological divide between the two men at the center of her own survival story — Simon Dekker, the Nazi collaborator, and his freedom fighter brother, Ewert — is a microcosm of Dutch society during the occupation, Dubi-Gazan said.

“It shows you how sharply divided Dutch society was,” she said. “Within the same household you had people working for the Nazis and people who were risking their lives to stop them.”