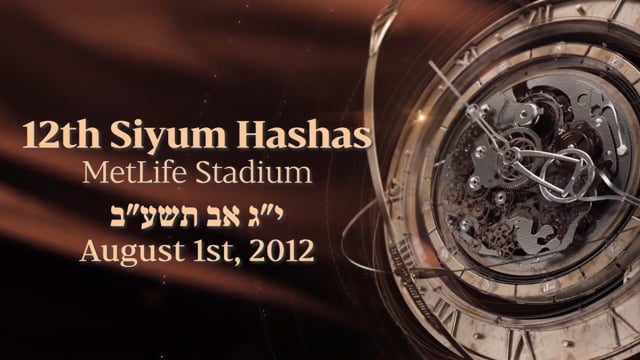 When some 90,000 yidden united seven years ago at the 12th Siyum HaShas, it was by far the greatest gathering of Kavod Shamayim and Kavod HaTorah in contemporary history – coming after the previous Siyumim set record after record.

Attendance at the 12th Siyum was roughly double that of the 11th Siyum – and mostly at a single location: MetLife Stadium, the largest arena in the Northeast. The sophistication of every aspect of The Siyum – and the resulting level of inspiration – was unlike anything the world has ever seen. “We are all gathered here to celebrate and proclaim that, ‘Yisroel v’oraysa chad hu’!” exclaimed the Novominsker Rebbe shlit”a, Rosh Agudas Yisroel.

Thousands of those seats at MetLife were filled by people who traveled long distances, by road and by air, from throughout the United States, Canada, Mexico, and even Europe and Eretz Yisroel. The very next morning, the 13th cycle of The Daf started around the world with a historic level of exuberance and achdus. Over the subsequent seven years, more yidden have been learning The Daf, with more shiurim and resources, than ever before.

As Klal Yisroel worldwide heads towards the completion of this cycle, The Agudah faced a tall order to once again host a truly historic event, even larger and more powerful than the 12th. Still, b’siyata dishmaya, after tireless work and innovative thinking, the upcoming Siyum will iy”H indeed be unlike any other – with the participation of over 100,000 yidden worldwide, lichvod HaTorah V’lomdeha.

Please visit thesiyum.org for information and updates regarding the upcoming Siyum HaShas, or text siyum to 313131. If you would like to joinChavrei HaSiyum or for general inquiries about the Siyum HaShas, email info@thesiyum.org.