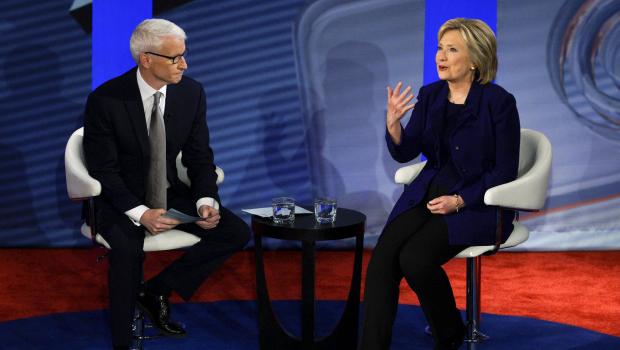 A question for Hillary Clinton was presented by Rabbi Jonathan Spira-Savett of Temple Beth Abraham in Nashua, N.H. He quoted a teaching from Rav Simcha Bunim of Peshischa zt”l.

“Every person has to have two pockets and in each pocket they have to carry a different note,” Spira-Savett said, quoting Rav Simcha Bunim, as reported by JTA. “And the note in one pocket says the universe was created for me. And in the other pocket the note says I am just dust and ashes.”

He then asked Clinton: “How do you cultivate the ego, the ego that we all know you must have, a person must have to be the leader of the free world, and also the humility to recognize that we know that you can’t be expected to be wise about all the things that the president has to be responsible for?”

Clinton said that contrasted her struggles “about ambition and humility, about service and self-gratification” with her husband, former President Bill Clinton, who she said “was such a natural, knew exactly what he wanted to do.”

Clinton said her struggle to balance ego and humility is a daily one. “And I don’t know that there is any ever absolute answer, like, ‘Okay, universe, here I am, watch me roar,’ or, ‘Oh, my gosh, I can’t do it, it’s just overwhelming, I have to retreat.’”

She said she takes advice from faith leaders, including rabbis who send her notes on Jewish religious teachings.

The quote from Rav Simcha Bunim obviously had an impact on Clinton, because she referred to it at the end of the town hall when she confessed to hankering for anonymity, to longing for time with friends.

“They keep me grounded,” she said. “They keep me honest. They deflate my head. They deal with the universe in one pocket and the dust and ashes in the other.”