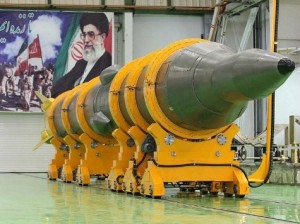 Brigadier General Massoud Jazzayeri, Deputy Chief of Staff of the Iranian Armed Forces, on Monday called for Palestinian Arabs living in the Israel’s regions of Judea and Samaria, dubbed the West Bank, to take up arms against Israel,according to semi-official state news agency Fars.

Much of the region’s sovereignty is in the hands of the Palestinian Authority government and its local mayors and city councils, but Israeli border police behind its security barrier, erected in 2005 to end the suicide bombing attacks that killed hundreds of Israelis each year since the Palestinian Intifada began in 2000, continue to be a visible point of contention.

Rather than work for closer political integration and trust building projects on each side, the Iranian Army, which has been supplying Hamas, in Gaza, with Fajr-5 missiles and Ababil drones, is calling for “more serious fighting in the occupied territories.”

Jazzayeri told Fars: “The Palestinian people, especially the youth, resistance forces and warriors have valuable experiences in fighting the Zionist enemy and through the spread and expansion of more serious fighting in the occupied territories, the usurpers and occupiers will have no option other than leaving these holy occupied territories.”

“The countdown has started for a change in the model of confrontation in the West Bank,” he said.

Fars said the general “noted that the West Bank has high potentials for confrontation with the occupiers,” and quoting him saying, “This capability accompanied by other power elements available to the main owners of the Palestinian territories can return the violated rights of the Palestinians to them.”

Iran’s Supreme Leader, Ayatollah Seyed Ali Khamenei said in July, that, “We believe the West Bank, too, should be armed just like Gaza and those who are interested in the fate of the Palestinians must work in this respect so that the pains and miseries of the Palestinian people will be decreased due to their mighty hands and the weakness of the Zionist enemy.”

Also in July, Commander of Iran’s Basij Force, Brigadier General Mohammad Reza Naqdi, called on the “resistance groups in Palestine, Syria and Lebanon to sign a defense treaty to help and support each other” against Israel. “We ask the resistance forces in Palestine, Syria and Lebanon to endorse a defense pact so that an attack on any of them will be an attack on all of them and if the Zionist regime makes an aggression against any of them, all of them will grow united to confront it.”

On Monday, Fars reported that General Jazzayeri said Iran will support “resistance groups” to return “the righteous rights of the oppressed people of the world.

Jazzayeri addressed the silence of the Arab leaders over the “savage massacre of the Palestinians” by Israel, and said, “The region would not have definitely been facing so much turmoil and chaos if the treacherous and dependent leaders of the region had not existed.”