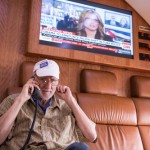 Jewish-American aid worker Alan Gross arrived home to celebrate Hanukkah after five years in a Cuban prison, prompting the Jewish world to both celebrate and breathe a collective sigh of relief. But analysts say Gross’s humanitarian release and the subsequent U.S.-Cuba prisoner swap have little to do with the prisoners and everything to do with the Obama administration’s final two years-and the reverberations might be felt as far away as the Middle East.

“You could say the president was saving face [by renewing diplomacy with Cuba],” said Reese Erlich, who has been covering Cuba as an international affairs journalist since 1968. “The Obama administration had been under a lot of pressure [about Cuba].”

U.S.-Cuba relations-which are being thawed by a loosening of travel and trade restrictions-have been a stitch in America’s side ever since the U.S. put its first embargo on the Caribbean nation in 1960. Each year from its 46th to 60th sessions, the United Nations General Assembly voted to condemn the American commercial, economic, and financial embargo, with only Israel voting against the condemnation.

Now, with two years left in office and a below-average approval rating (according to Gallup polling), President Barack Obama is “looking for a legacy,” said Washington, DC-based lawyer Robert Muse, who has decades of experience in U.S. laws relating to Cuba.

Muse explained that many presidents choose to seek their legacies in the realm of foreign affairs because such moves are met with significantly fewer challenges and constitutional hurdles than those relating to domestic affairs. In 1972, for example, Richard Nixon was the first president to visit the People’s Republic of China, which at the time the U.S. considered a foe. That visit ended 25 years of estrangement between the two nations. Muse said that although Nixon was swept from office shortly thereafter with the Watergate affair, he is always credited with China.

Piero Gleijeses, a professor of U.S. foreign policy at the Paul H. Nitze School of Advanced International Studies at Johns Hopkins University, said he attributes rapprochement with Cuba to Obama’s “new lease on life” since the Democrats’ defeat in November’s midterm elections. Gleijeses said Obama is now making moves he sought to make from the beginning of his presidency, but “didn’t have the political courage” for at the time, such as immigration reform.

“I believe Obama came into the presidency with the desire to normalize relations with Cuba, but it seemed too politically costly at home. … Now he seems more lively and confident,” said Gleijeses.

Obama’s new attitude, as Gleijeses sees it, segues into possible implications for the U.S. role in the Middle East and the Israeli-Palestinian conflict. The Obama administration already has a rockier-than-average relationship with Israel when compared with most past presidents.

“Will [the Cuba move] also reflect in the Middle East?” Gleijeses asked. “Will Obama now have the courage to stand up to Israel? Obama has made clear on several occasions that he is appalled by Israeli policy in the West Bank. But he has not had the guts to impose sanctions on Israel. Of course, his hands will be somewhat tied by Congress and the pro-Israel lobby, but that might be next.”

Larry Birns, director of the Council on Hemispheric Affairs think tank, expressed similar sentiments. He said that when Obama first campaigned for president, he promised the American people that he would take action on the long-standing Cuba issue, but until recently had made weak moves.

“[Obama] was becoming increasingly discredited,” Birns said, noting that what comes after this latest maneuver could be “a whole rash of possibilities”-including bold moves in the Middle East.

While running for president in February 2008, Obama told an audience in Cleveland, “There is a strain within the pro-Israel community that says unless you adopt an unwavering pro-Likud approach to Israel, that you’re anti-Israel.” When Obama made that assertion, Likud had been out of power for two years and Israel was being led by Kadima (whose leaders included Ehud Olmert, Tzipi Livni, and Shimon Peres), a party that had been pursuing territorial compromise of unprecedented magnitude. Now, Prime Minister Benjamin Netanyahu’s current Likud government will be challenged by an alliance between Livni and Labor party leader Isaac Herzog in next March’s Israeli Knesset elections. The Livni-Herzog tandem would seemingly fall more in line with Obama’s views on the Israeli-Palestinian conflict than Netanyahu currently does.

Then there is the Cuba move’s implications for the rest of the Middle East. In a column for his “Pressure Points” blog, Elliott Abrams, a senior fellow for Middle Eastern studies for the Council on Foreign Relations and former deputy national security advisor for president George W. Bush, hinted that Obama’s Cuba rapprochement could indicate a willingness to partner with totalitarian Mideast regimes-perhaps at the expense of U.S.-Israel relations-for practical purposes.

“From Iran to Egypt to China, the Obama administration has shown itself largely indifferent to human rights in its efforts to ‘reach out’ to and ‘engage’ with regimes-rather than with the peoples they oppress,” Abrams wrote. “This looks like another example. So, joy for Alan Gross and his family. But not for the people on the island from which he has been freed.

Gross was arrested for building telecommunications infrastructure-something which is a basic freedom in most countries, but which Cuba considers illegal. There has not been an indication of whether or not that policy would change with the new U.S.-Cuba ties.

“The U.S. has cordial relations with the scum of the earth,” Gleijeses told JNS.org, citing American ties with Saudi Arabia, where there are no women’s rights nor freedom of religion. The U.S. also has ties with China, noted Muse, where child labor and other human rights laws are regularly ignored.

“Every foreign policy is a separate episode,” Muse said.

Whether the Cuba move foreshadows a more aggressive Obama administration policy on Israel remains to be seen.

“Will Obama get the courage to roll the ball with Israel? I don’t know,” Gleijeses said.

Maayan Jaffe is an Overland Park-based freelance writer. Reach her at maayanjaffe@icloud.com or follow her on Twitter, @MaayanJaffe.