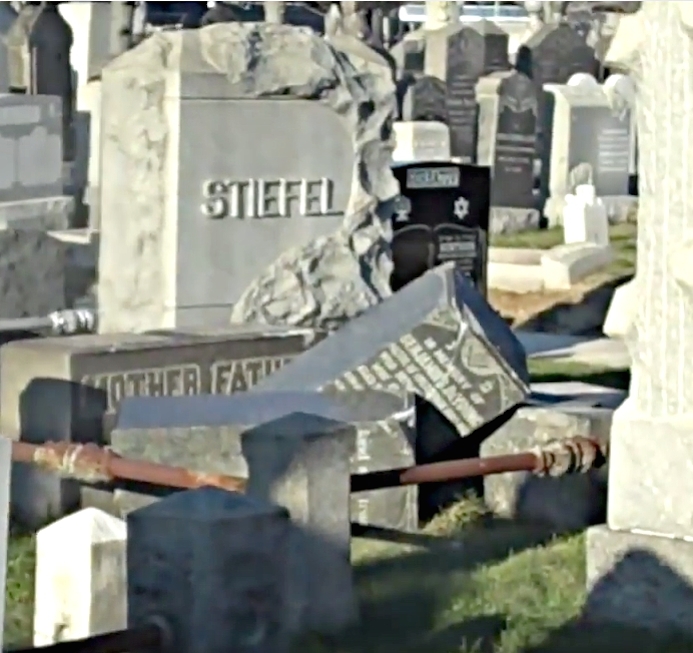 Dozens of bomb threats have been called into Jewish institutions since early January, and scores of headstones at four Jewish cemeteries were desecrated in recent weeks. But is there actually a rising tide of anti-Semitism in America?

Despite the threats and attacks, positive feelings between different American religious groups are on the rise, as measured in mid-to-late January by the well-respected and non-partisan Pew Foundation. Additionally, far more damaging anti-Semitic incidents took place throughout the preceding decade and a half than the ones garnering attention in recent weeks.

During the past two months, there have been more than 100 bomb threats directed at Jewish institutions—mostly at Jewish community centers (JCCs)—and cemetery attacks near St. Louis, in Philadelphia, in Rochester, N.Y., and in Brooklyn, N.Y. Federal authorities Friday arrested Juan M. Thompson, a 31-year-old former news reporter from St. Louis, in connection with eight of the bomb threats.

Running parallel to these anti-Jewish hate crimes has been a groundswell of anger directed at President Donald Trump for allegedly failing to swiftly or sufficiently denounce anti-Semitism. Some critics have labeled the president an anti-Semite and claimed he is responsible for unleashing a wave of religious hatred.

In response, Trump and his spokespeople have been condemning the recent acts of anti-Semitism, using that specific phrase. The president began his speech to Congress Feb. 28 by calling attention to the “recent threats targeting Jewish community centers and vandalism of Jewish cemeteries.”

But is America witnessing a significant uptick in anti-Semitism, or just a surge in the attention paid to, and the reporting of, anti-Semitic incidents?

To answer that question, the incidents must first be appraised accurately. They are religious hate crimes, according to the FBI’s definition: “a criminal offense against a person or property motivated in whole or in part by an offender’s bias against a religion.”

The past 18 years, however, have witnessed larger-scale crimes against Jewish institutions such as the following:

The recent bomb threats, none of which were followed by actual attacks, are not a new phenomenon in the U.S., although the successive and coordinated hits on so many Jewish institutions in a relatively short period of time is in fact unprecedented.

Jewish cemeteries, meanwhile, have been occasionally vandalized for as long as they have existed. In December 2010, more than 200 headstones were knocked over, smashed and graffitied at Brooklyn’s Washington Cemetery—the same cemetery that was targeted last weekend. Internet searches going back decades reveal dozens of Jewish cemetery desecrations, but the overwhelming majority of these attacks received minimal media attention and some were not reported at all. So why have the four cemetery attacks in recent weeks proved different?

A security expert who deals exclusively with Jewish institutions, Jason Friedman of the Community Security Service (CSS), told JNS.org that given his historical perspective, he is not convinced that there has been “a dramatic increase in anti-Semitic events rather than a big increase in the reporting of and on such events.”

Two entries from 2016 in the CSS report are a foiled bombing attempt at an Aventura, Fla., synagogue in April and explosives thrown at the homes of two Chabad-Lubavitch rabbis in Rockland, N.Y. Although those acts caused actual property damage and were intended to inflict physical harm, even death, they received little media coverage.

The FBI has been compiling statistics on hate crimes since 1999. From 1999-2015, the most recent year for which data is available, Jews have always been the biggest target of religious hate crimes by a wide margin.

In 1999, Jews were on the receiving end of 76 percent of all religious hate crimes in America. That figure was 56.5 percent in 2001 and 65.3 percent in 2002. No other religion suffered half as many hate crimes as Jews during those years. Jews have been the targets of between 500 and more than 1,000 hate crimes every year since the FBI began its documentation.

While news headlines and politicians decry the “rising tide” of hatred against Jews, the Pew Foundation’s recently published report—“Americans Express Increasingly Warm Feelings Toward Religious Groups”—belies such claims. Between June 2014 and January 2017, according to the study, non-Jewish Americans’ feelings toward Jews grew warmer, from 63 “degrees” to 67 degrees. The survey was conducted from Jan. 9-23, 2017.

Friedman, meanwhile, said he sees a silver lining in the possible uptick in the reporting of anti-Semitic incidents—that it encourages Jewish institutions to be forward-thinking and proactive. JNS.ORG