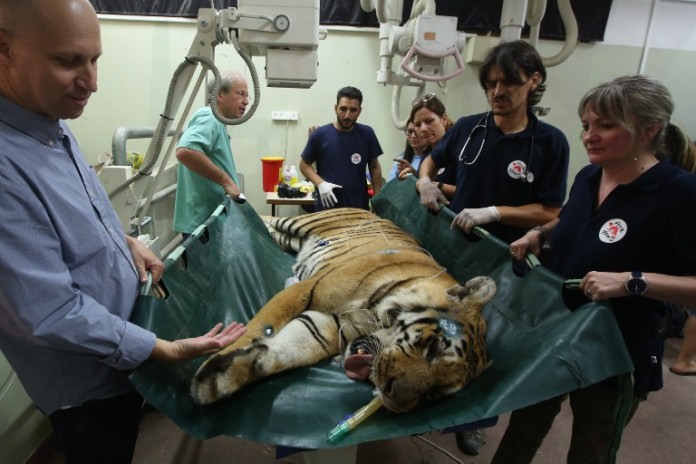 The last tiger in Gaza departed the coastal enclave at dawn on Wednesday, traveling in a wooden crate, cooled by chunks of ice placed on top of his temporary transport.

The tiger was high, perhaps thankfully.

He was given a sedative by his new keepers to help him deal with the strangeness of his trip.

The Bengal tiger was rescued from a painfully small cage here in the now-shuttered amusement park dubbed by animal rights advocates “the worst zoo in the world.”

Truth be told, there are probably worse. It is a big world and there are many miserable zoos.

But the Khan Younis facility was unique. Its owner displayed the mummified corpses of animals that had died at his zoo of stress, disease and starvation.

The last tiger in Gaza, renamed Laziz, meaning “delicious” in Arabic, passed from the Gaza Strip into Israel at the Erez crossing early Wednesday. He was scheduled to visit Hebrew University’s Koret veterinary hospital and then continue on to Ben Gurion Airport to make El Al’s evening Flight 71 to Johannesburg.

Laziz was traveling with 14 fellow survivors of the Khan Younis zoo. These were the lucky ones – out of 220 inhabitants at the zoo during its peak.

In crates beside the tiger was a little ark: Two porcupines, which last week escaped but had been recaptured. Two long-legged buzzards. A pelican which had lived in a waterless world in his aviary. Two tortoises which barely had room enough to turn around in their enclosure.

There was a mother deer, too. She had lost her fawn, which died of wounds sustained struggling to escape her cage a few weeks ago. And an emu, which finally went into his shipping crate after putting up a helluva fight.

Then there were the monkeys – two macaques and three vervets. The monkeys had to be sedated before they could be examined and placed in their dog-kennel style traveling crates.

It is not easy to hit an angry survivor-monkey in his cage with a syringed dart fired from a blowgun as a dozen journalists with cameras watch.

Not easy at all.

Two of the monkeys were discovered to be pregnant.

The last to be loaded on the truck Tuesday night was the tiger. He weighs more than 400 pounds, plus his crate. Strong men could barely lift him. Finally, a local with a motorbike attached to a trailer arrived to help.

As the animals were being subdued and put into their crates, the local Palestinians at the zoo joked that they would be happy to trade places to get out of Gaza.

If they’d stop engaging in terror attacks against its neighbor, Israel, it might help.

Before departing Wednesday morning, the animals and their new caregivers, from the international animal charity and rescue group called Four Paws, spent the night in the parking lot of the Marna House Hotel in Gaza City.

Passersby peered into the truck and tried to capture images on their smartphones.

The tiger has lived an impossible life.

The zoo’s owner and patriarch, Ziad Awaida, said he purchased two tiger cubs from black-market traders providing animals for an Egyptian zoo. The cubs, Awaida said in an interview, were smuggled into Egypt from Senegal. For the flight and to pass Egyptian customs, they were disguised as ordinary house cats.

“They painted them black to cover the stripes,” Awaida said. He admits this is an incredible detail. “This is what I was told.”

Where the tigers were born, Awaida said, he does not know. When he bought them in Egypt in 2007, they were still nursing on milk.

The tigers were smuggled into Gaza through the tunnels from the frontier town of Rafah. This may sound extraordinary, until you learn that they have used the tunnels to smuggle Mercedes-Benz sedans, orders of Kentucky Fried Chicken and Grad rockets from Iran.

The tigers grew up in their cage in Khan Younis and were the zoo’s most popular attraction. Tickets to enter the park cost 50 cents for children, almost a buck for adults.

The pair survived wars in 2008 and 2012 between Israel and Hamas, the Islamist terrorist murderous organization that controls the Gaza Strip. In the aftermath of the third and most costly war in the summer of 2014, the female tiger died.

Awaida said he could not reach the zoo for 17 days because of the shelling and airstrikes from Israel and rocket and mortar attacks by Hamas. Many animals died during the conflict and afterward.

The zoo owner used his rudimentary taxidermy skills, along with formaldehyde and sawdust, to mummify the dead and display them. In addition to the tiger, visitors could look at desiccated carcasses of a baboon, lion and crocodile, and the scattered skeletons of other animals.

The zookeeper’s morbid display was both a financial and political decision. He had bought the animals, and people would pay to see them, dead or alive; he also wanted to show Palestinians what the Gaza wars and Israeli siege had wrought.

What will happen to the animals now? The zoo is closed. The Four Paws group is transporting the birds, deer and porcupines to animal reserves in Jordan. The five monkeys will live out their days at a primate sanctuary in Israel.

The tiger is headed to Lionsrock, a big cat preserve in South Africa, where he will be free to roam a large natural enclosure. He is 8 or 9 years old. Tigers in the wild live around 17 years but those in captivity can survive longer, so maybe the story ends well for him.

“He will have a good life in Africa,” promised Amir Khalil, a veterinarian for Four Paws.

The story of the tiger rescue was not top news in Gaza. The media at the zoo were mostly from the international press and wire agencies.

On Facebook, locals commenting on photographs of the scene were mostly unmoved.

Akram Radi wrote in his post, “Hey, they treated the animals and freed them from the zoo? Now who is going to free the humans from the world’s biggest zoo, Gaza?”