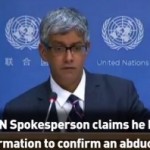 Israel’s mission at the United Nations has ripped the international body as hypocritical, “0ut of touch and out of line” for claiming in had “no information to confirm” the abduction of three Israeli teens last Thursday.

In a video posted to YouTube, the mission pointed to statements from the White House, ABC News, and even Palestinian Authority president Mahmoud Abbas confirming the abduction before admonishing, “The UN is out of touch, out of line and out of time.”

Initially, the UN issued a statement condemning the kidnappings, saying, “The Secretary-General condemns the abduction on 12 June of three Israeli students, including two minors, in the West Bank. He expresses his solidarity with the families of the abducted and calls for their immediate release.”

But shortly afterwards the comments were walked back by the Secretary-General’s spokesperson Farhan Haq who answered a question from a journalist by asserting, “We have no information to confirm an abduction.”

Popular blogger Elder of Ziyon pointed out that even terror group Hamas, whom Israel has blamed for the kidnapping, acknowledged the crime.

The blogger asserted that the turnabout at the UN may have come as a result of “pressure from the Arab world.”

Elder of Ziyon said, “The UN is happy to split hairs when Palestinian Arabs might be blamed for something but hands out blanket condemnations of Israel for breakfast.”

The three Israeli youths, Gilad Shaar, 19, Eyal Yifrach, 16, and Naftali Frankel, 16, were abducted at a hitchhiking post late at night night. Thousands of Israeli troops are currently combing through Palestinian Authority controlled towns and villages searching for the abductees.