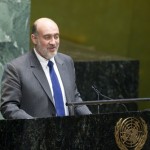 Israel has launched a campaign to have Yom Kippur recognized as an official holiday on the United Nations calendar.

The U.N. officially recognizes 10 holidays, including Christmas and Eid al-Fitr. Absent from the official holidays is a Jewish one. A holiday at the U.N. entails a day without meetings, committee hearings, or official events. Several members of Israel’s delegation to the U.N. have said being compelled to show up to work on Yom Kippur is troublesome.

The U.N. General Assembly convenes annually in September. On years in which such meetings have conflicted with Yom Kippur, special requests are submitted to postpone the assembly to allow the Israeli prime minister to participate.

Israeli Ambassador to the U.N. Ron Prosor has distributed a letter among U.N. ambassadors as a first step in a comprehensive campaign to highlight Israel’s request, paving the way to bring it for a General Assembly vote. There are three monotheistic religions, but just two of them appear on the U.N. calendar, Prosor said, adding that such discrimination must come to an end.