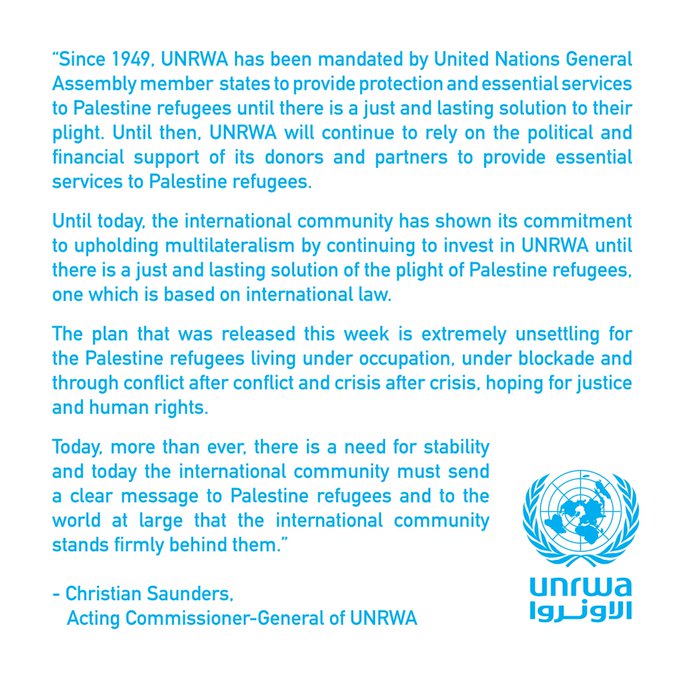 The Trump plan stipulates that once Israel and the Palestinians reached an agreement, UNRWA would be disbanded and Palestinian refugee status would be considered null and void.

Christian Saunders, interim commissioner-general of UNRWA, said on Sunday, “The plan that was released this week is extremely unsettling for the Palestine refugees living under occupation, under blockade and through conflict after conflict and crisis after crisis, hoping for justice and human rights.”

In response to Saunders, Israel’s Foreign Ministry tweeted, “Statements criticizing the US peace plan made by @UNRWA’s Acting Com Gen @CFSaundersUN are unacceptable & in blunt contrast to the commitment of UN officials to uphold values of neutrality & impartiality. It’s another proof that UNRWA is part of the problem & not of the solution.”

UNRWA, established in 1949 shortly after Israel’s War of Independence ended, has been controversial for decades, with critics asserting that it engages in antisemitism, incitement and collaboration with terrorism, as well as perpetuating the refugee problem it was ostensibly established to solve.

Trump cut off all US funding of UNRWA in 2018, with the State Department calling the organization “irredeemably flawed.”