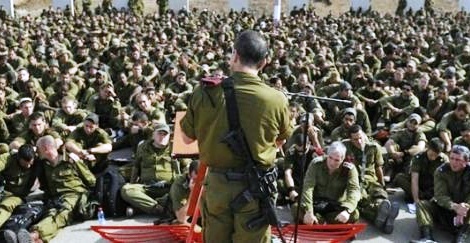 With Operation Pillar of Defense well into its fourth day, Israel has launched a diplomatic campaign meant to lay the ground for an expanded offensive on Gaza.

In a message to the world’s nations, Israel said the IDF is gearing towards significantly expanding its operation in the Gaza Strip, and has begun drafting tens of thousands of reserve troops ahead of a ground incursion.

In addition, Israel is making use of gruesome images of the destruction caused by the rockets fired on southern communities from the Hamas-ruled enclave. A statement accompanied by pictures of a baby injured when a projectile hit the city of Kiryat Malachi on Thursday accuses Hamas of hurting “children on both sides” of the conflict.

“The citizens of Israel are behind the operation, and their resilience is a major component of our national strength,” the message added.

“The only way we can achieve peace and security is to create real deterrence via a crushing response that will make sure they don’t try to test us again,” Lieberman said at a lecture in Kiryat Motzkin. “This isn’t an all-out war, but an operation with defined goals.”

The minister stressed that in the event that such a ground incursion is launched, Israel will have to see it through.

“This wasn’t done during Operation Cast Lead, which is why we failed to achieve our goal and had to pay a heavy toll when it came to global public opinion,” he argued.

“Our leadership is trying to drag us into another unnecessary war that will claim victims for naught,” she said. “Our experience indicates that ground operations are a recipe for a bloody conflict.”

Gal-On urged the government to initiate talks with Hamas via Egyptian or international mediation.

For the time being it appeared the US is backing the operation. The White House said in a statement early on Saturday that President Barack Obama reiterated US support for Israel’s right to defend itself during a phone conversation with Prime Minister Benjamin Netanyahu.

However, the New York Times reported that the Obama administration fears that an Israeli ground offensive in Gaza will result in civilian casualties, play into Hamas’ hands and cause damage to Israel.

The report said American officials have been urging their Israeli counterparts not expand the conflict for fear that further escalation would damage Israel’s already shaky relations with Egypt and Jordan.