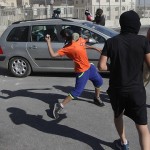 Erica Marom, of Tekoa, feels lucky to be alive after she and her family came under a barrage of rocks and cement blocks thrown by a group of Palestinian school kids on Thursday that left her and her six-month-old infant lightly hurt.

“It was very, very scary and it’s a miracle we survived this attack. They were trying to kill us,” said Marom.

Marom was in the passenger seat and her husband, Moshe, was driving with their three children in the back seat when she told Moshe to slow down because there were school children in uniforms walking on the side of the road. All of a sudden, she heard a series of loud booms “and they were smashing our car with cement blocks.” The car sped away with its back windshield shattered.

Six-month-old Adir, who was in a rear-facing child seat, had glass all over him.