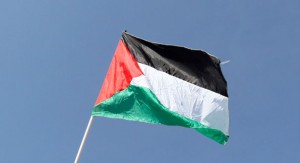 An online advertising banner that used the Palestine Liberation Organization (PLO) flag to promote an upcoming food festival has caused a stir in southern Israel, prompting the festival’s chief organizer, the Ofakim Municipality, to issue an apology.

The banner appeared on the Israeli municipality’s Facebook page ahead of the Aug. 25-26 event in the city’s local stadium. The PLO flag, which is used by the Palestinian Authority, was displayed along the Israeli, Japanese, and Indian flags, as well as what appear to be the flags of Puerto Rico, Guinea, and Mauritania. The Palestinian flag was ultimately replaced with the French flag.

“Having a government agency hoist this flag is a provocation against the very underpinnings of the state [of Israel], and to this one might add various criminal aspects,” said Ofakim resident Benny Cohen, Israel Hayom reported.

The Ofakim Municipality later tried to explain the original rationale behind the move.

“In advertising for the festival, the graphic designer decided to represent the rich variety of cuisines by displaying flags of the world’s countries, among them, the controversial flag of Palestine,” the municipality wrote Saturday on its Facebook profile. “As a result, we received negative responses to the display of the flag. The festival has no culinary connection to Palestinian cuisine, or to political statements of any kind, and its focus is exclusively on food.”