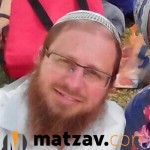 An Israeli man, R’ Yaakov Litman Hy”d, and his teenage son were killed and five others wounded Friday when a Palestinian fired on their vehicle south of Chevron.

Just before 3 p.m. on Friday, the Magen David Adom rescue service received a report of gunshots fired at a car near Otniel Junction in the southern West Bank. Paramedics arrived to find R’ Yaakov and his son critically injured and a third lightly hurt. They pronounced the two who had been critically hurt dead at the scene.

The two were later identified as R’ Yaaklov, who was in his 40s, and his 18-year-old. Initial reports mistakenly said the fatalities were a couple in their 50s.

The lightly injured victim, a 16-year-old boy, was taken to Soroka Medical Center in Beer Sheva for treatment. Four others were also sent to Soroka for treatment for shock. Channel 2 television said that three of those treated for shock were children.

According to an initial report, a Palestinian terrorist exited his vehicle and fired on the Israeli car, then fled the scene. IDF troops were searching the area for the suspect, the army said.

Noam Bar, a senior Magen David Adom paramedic, said: “When we arrived at the scene we saw seven passengers outside the vehicle, two of them — a man of about 40 and a youth of about 18 — lying unconscious with bullet wounds to the upper body. They displayed no signs of life and we were forced to pronounce them dead at the scene. In addition, we administered first aid treatment and evacuated to Soroka hospital a youth of about 16 with light bullet wounds to his limbs and four people suffering from shock.”

Prime Minister Bibi Netanyahu expressed his condolences following the attack, and vowed that Israel would hunt down those responsible for the killings.

“We will get to these heinous murderers and we will bring them to justice as we have done in the past,” the prime minister said, warning that Israel would continue to fight terror wherever necessary.

The Walla website said that Hamas, which has a minor foothold in the West Bank but has been agitating for an increase in attacks on Israelis by West Bank Palestinians, welcomed the attack as a “quality development in the intifada.”

Writing on its official website, the Gaza-based terror group wrote: “We welcome the brave action carried out by the resistance south of Hebron. It signifies a quality development in the ‘Al-Quds’ intifada and proves that the resistance can deter the occupation, which only understands the language of force.”