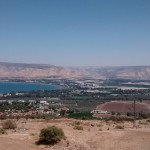 Jordan Valley – A new Israeli plan to supply Jordan with 50 cubic meters of water from the Sea of Galilee via new water-pipe, is drawing harsh criticism from environmentalists. The protesters contend that the water should be transferred instead via the Jordan River, which “has been contaminated in recent years and turned into a sewerage channel.”

“Israel shouldn’t build an expensive new water-pipe. The water should be transferred through the natural route, the Jordan River, in order to revive its wildlife,” Ram Hachmon, one of the protest leaders told Tazpit News Agency.

Hachmon, who is the Head of Agriculture in Degania Bet, a Kibbutz near the Jordan River, said that “The Israeli Water Authority is trying to distract anyone who asks questions. They promise to transfer extra water to the river, but these are empty words and difficult to enforce.”

Since Israel and Jordan signed their Peace Agreement in 1993, Israel has been supplying Jordan with 50 cubic meters of water per year from the Sea of Galilee in Northern Israel, which supplies much of Israel’s fresh water.

According to the new agreement, which will be discussed over the next few weeks, Israel will build a new pipe to supply more water in exchange for desalinated water from a Jordanian facility near Aqaba in the south.

The plan, supported by the Israeli Water Authority and the Ministry of Environmental Protection, received hundreds of official objections. “Many environmentalist movements joined us, objecting to the plan and issuing press announcements,” said Hachmon to Tazpit.

The Israeli authorities delegated the task of transferring the water to Mekorot, Israel’s national water company. Hachmon complained that “because Mekorot deals with pipes- they chose to stick to what they know and ignore the Jordan River’s dire situation.”

“We prepared an alternative plan and presented it to the authorities, but Mekorot object to it. They want to lead the plan because of the large amount of money involved,” he added.

“We currently release 10 million cubic meters per year from the Sea of Galilee, and this figure will gradually increase to 30 million in order to achieve ecological rehabilitation and tourism development,” the Water Authority Spokesperson added.

The Israeli Ministry of Environmental Protection also responded to Tazpit: “We have been involved in the plan from the beginning. Our position is that the water-pipe can and should be built, to provide water to the Hashemite Kingdom.”

“Independently, action should and is being taken to expand the river’s water allocation, but the issue isn’t connected to the pipe.”