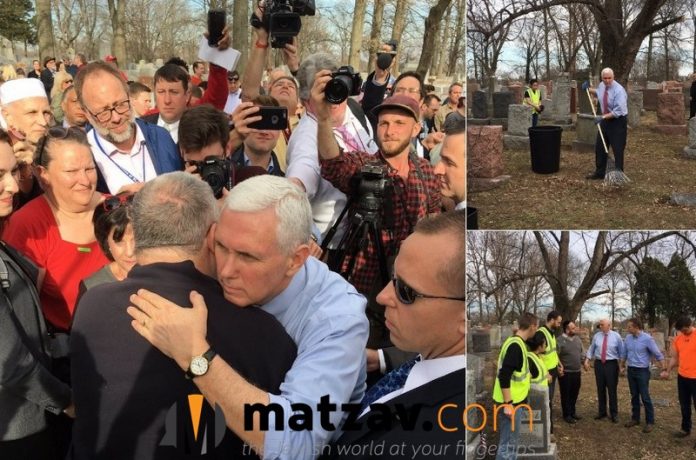 “We appreciate @VP Pence’s visit to the desecrated cemetery in St. Louis,” Rivlin tweeted. “We stand together against antisemitism and this crime of hate.”

Pence — who was joined at the cemetery by Missouri’s Jewish governor, Eric Greitens — said while there, “There is no place in America for hatred or acts of prejudice or violence or antisemitism.”

The vice president later tweeted, “MO’s people are inspiring the nation w/ their compassion for the Jewish community. Thank you for showing the world what America is all about.”

On Tuesday, President Donald Trump said anti-Semitism is “horrible” and “has to stop.”

In a statement delivered to the press after a tour of the National Museum of African American History and Culture in Washington, DC, Trump referred to the recent surge of antisemitism in the US — including the cemetery incident and a spate of telephone bomb threats against Jewish community centers across the country.

“The antisemitic threats targeting our Jewish community and community centers are horrible and are painful and a very sad reminder of the work that still must be done to root out hate and prejudice and evil,” Trump said.

In remarks given at a synagogue in Sydney, Australia on Wednesday, Israeli Prime Minister Bibi Netanyahu welcomed the US leader’s words, saying, “It’s very important that President Trump took a strong stand against antisemitism. And it’s important that we all continue to do so in the years ahead.”