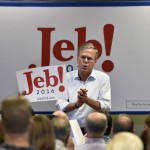 Jeb Bush tweeted that he is praying for the hundreds of Muslims killed during a stampede in Mecca Thursday.

“Praying for the hundreds of innocent Muslims who suffered a tragic death in the stampede in Mecca during the Hajj pilgrimage,” he wrote.

More than 700 people were killed and hundreds of others were injured during the Islamic pilgrimage. Read more at Twitter.