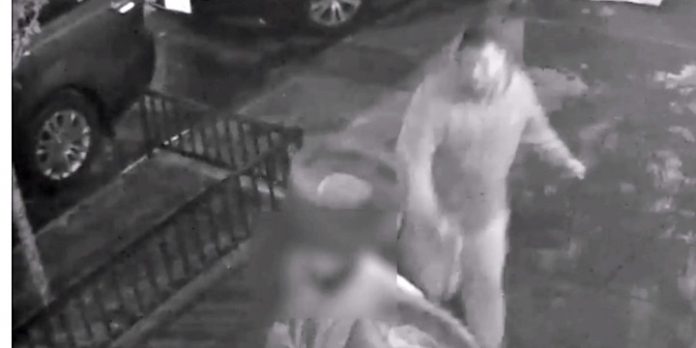 Security footage showing the moment an Orthodox Jewish man in Brooklyn was violently punched in the back of the head by suspect Enrique Gerena. Photo: Screenshot.

Leaders of the Orthodox Jewish community in Brooklyn on Wednesday welcomed the arrest by New York City police of a 32-year-old man who violently assaulted a Hasidic Jew in the borough’s Williamsburg district on Friday night.

The United Jewish Organizations of Williamsburg and North Brooklyn issued a statement thanking the NYPD’s Hate Crimes Task Force “for their prompt and appropriate response leading to the arrest of the individual suspected of carrying out the unprovoked hate-crime attack.”

Friday night’s incident occurred as the victim was walking home from Shabbat services with his young son. When he stopped to greet a friend on Throop Avenue, Gerena allegedly ran up behind the victim, landing a brutal punch to the back of the head and instantly flooring him. The victim has since made a recovery.

Rabbi David Niederman — president of the United Jewish Organizations of Williamsburg and North Brooklyn — said on Wednesday that the “hate wave has to stop. Fortunately, the NYPD and our elected officials are determined to join forces to do whatever is needed to stop it.”

In a statement, Rabbi Niederman added: “We are seeing a spike in antisemitic attacks across the city. Young Hasidic kids shouldn’t be afraid simply because of their Jewish faith of monstrous attacks when walking home.”