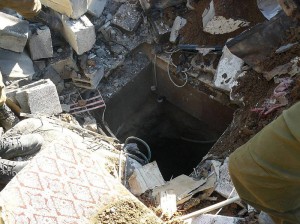 Jewish human rights group The Simon Wiesenthal Center on Wednesday called for the United Nations Human Rights Council to investigate the deaths of the 160 Gazan children who died building Hamas’s terror tunnels into Israel. The call comes a week after the same UNHRC condemned Israel, with a majority of its members voting to open an investigation into “human rights abuses” by the Israel Defense Forces as it struck back at Hamas, whose installations are hidden among civilian infrastructure, including its de-facto headquarters, inside of the Al Shifa Hospital.

The revelation about the child labor used by Hamas came from an article in Jewish online news magazine Tablet, which cited a 2012 article in the Institute for Palestine Studies by Nicolas Pelham.

“A similarly cavalier approach to child labor and tunnel fatalities damaged the movement’s [Hamas’s] standing with human-rights groups, despite government assurances dating back to 2008 that it was considering curbs.”

“During a police patrol that the author was permitted to accompany in December 2011, nothing was done to impede the use of children in the tunnels, where, much as in Victorian coal mines, they are prized for their nimble bodies. At least 160 children have been killed in the tunnels, according to Hamas officials. Safety controls on imports appear similarly lax, although the TAC insists that a sixteen-man contingent carries out sporadic spot-checks.”

According to Pelham, since 2008, Hamas’s ‘Tunnel Affairs Commission’ stonewalled complaints about the illegal use of child labor and their deaths from the dangerous work.

Cooper asked: “Isn’t there a single member of the UNHRC, whether the U.S., Germany, UK, or France to stand up and demand accountability for Hamas’s barbarities, at least when the victims are Palestinian children? And where is the multitude of NGOs devoted to protecting children? Will they ever target their moral outrage at anyone in the Middle East other than Israel?”

He said, “Perhaps we shouldn’t be surprised by anything Hamas does. What else to expect from a regime that brainwashes children as young as three with genocidal propaganda using Mickey Mouse characters to convert them to the cult of suicide bombers; that has rewarded the voters in Gaza who put them in power, by using their constituents as human shields?”

“Still, a UN investigation could at least restore a degree of dignity to these Palestinian kids that was robbed from them in life by their leaders and belatedly put to the terrorist leaders that perhaps the international community will begin to hold them accountable for their crimes against humanity”, Cooper concluded.

Israel’s Operation Protective Edge was launched to counter Hamas’s continual rocket fire into Israel and neutralize the threat from its “terror tunnels,” which burrow into the many Israeli farms that abut Gaza.

Hamas is believed to have spent millions of dollars of foreign aid and used thousands of tons of concrete, meant for building, to construct the tunnel network. The Washington Post said that the tunnel Hamas used to breach a kibbutz on the Gaza border last week required 800 tons of concrete.

So far, the IDF has found 30 tunnels, but many more may be undiscovered. Ahead of this war, Hamas created a special force called “Nukba” (The Chosen Ones) to expedite the digging process, which the IDF’s Southern Command noted because of an increase in Hamas’s underground activity. Three shifts worked on each tunnel over 24 hours, digging up to 15 meters per day.

But rather than condemn Hamas, 29 countries on the 46-member United Nations Human Rights Council voted to investigate Israel for human rights violations in Gaza.

The vote, in a special session last week, was called “destructive” and lacking “any semblance of balance” by Keith Harper, UNHRC Ambassador from the U.S., the only country on the 46-member commission to vote against launching an investigation into war crimes by Israel in Gaza. France, the U.K., Germany, Italy, the Czech Republic, Ireland, Estonia, and Romania abstained from the vote.

In response, Israeli Prime Minister Benjamin Netanyahu called out Hamas for its human rights violations against Israel, and the people of Gaza.

“We’re responding in our own way by targeting the rocketeers and seeking to ferret out these terrorists who are hiding behind civilians while firing at our civilians,” Netanyahu said. “This is a double war crime, and naturally it’s made more difficult for us to fight this criminality because as I’ve just shown you, the terrorists are firing rockets from schools, from mosques, from hospitals, from heavily civilian populations; and we have to try and are doing our best to minimize civilian casualties.”

Indeed, in ignoring the terror tunnels, the UN group also ignored one finding this week, where bags of cement marked UNRWA, the UN arm that manages schools and other institutions in Gaza, inside a terror tunnel.