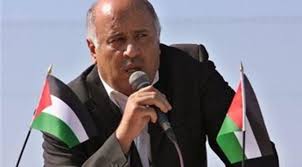 Speaking to Kuwaiti TV channel Sawt Al-Arab on July 8, Rajoub equated the Nazi death camp to Israel’s “systematic policy, with barbaric and racist living conditions and conduct in order to cause physical and mental harm to these prisoners.”

This was not the first time Rajoub has made the comparison. In February 2019, during a protest against a U.S.-led conference in Warsaw to discuss peace and security in the Middle East, he stated that “in every city in Palestine, from Rafah to Jenin, there is an Israeli Auschwitz to massacre Palestinians.”

Israeli media watchdog NGO Palestinian Media Watch has also documented similar statements by Fatah spokesman Osama al-Qawasmi, who has stated that “no regime in history—not Hitler, not the Nazis, not fascism—has implemented what Israel is implementing against the Palestinians.”

Speaking on official Palestinian Authority TV on July 7, former Jordanian education minister Ibrahim Badran said Israel is a “racist state” that “rejects the other in a Nazi, Hitlerian manner.”

“Israel is a racist state,” said Badran, “not just discriminatory, but a racist [state] … in its political and ideological structure, in the sense of rejecting the other in a Nazi, Hitlerian manner—rejection whose goal is to destroy the other, to kill the other, and not just to take a negative position against him. … This is a barbaric, racist state that has outdone what Hitler did.”

The Jordanian ex-minister also warned all Arab states of “the Zionist danger,” saying that “colonialist” Israel/Zionism was plotting to take over the entire Arab world. Only by supporting the Palestinian cause may the Arab states cordon off “this evil that Zionism represents,” said Badran.

“The Arab states must understand that the Zionist danger is not limited only to Palestine, and that the Zionist ambitions are not limited to Palestine. This is a colonialist movement of occupation—greedy and insatiable. … The Arab states and the intellectuals must understand that standing side by side with the Palestinian people … is support for the security of their states and societies and the cordoning off of this evil that Zionism represents.” JNS.ORG