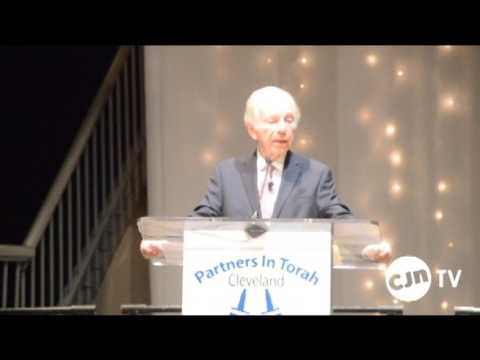 The following is from a Cleveland Jewish News report by Kristen Mott:

Former U.S. Sen. Joseph Lieberman said being an observant Jew was a positive during his career in public service, though at times he did face challenges. When he was elected to the U.S. Senate, he recalled asking his rabbis for advice about what to do if a session was scheduled on Shabbos.

“I felt a real obligation never to miss a vote because of my religious observance, because I couldn’t delegate my vote, there are no proxies in the Senate, and I never wanted anybody to say, ‘Lieberman missed a vote, didn’t vote for us in Connecticut because of his religion, he put his religion above us.’ Bottom line I’d say over my senate years, sometimes it was difficult, but it was definitely doable,” Lieberman said.

Lieberman, who was the Democratic Party’s nominee for vice president in the 2000 election, making him the first Jewish candidate on a major American political party presidential ticket, said his passion for history and the value of tikkun olam inspired him to pursue a career in politics. He also credited his parents for raising him to be an observant Jew and for instilling in him a faith in America.

“I should be what I believed in, what I wanted to be and I would gain more respect as a result of that. You know what, they happened to be right, and I will forever be grateful to them.”

After his run for vice president in the 2000 presidential election, he ran as a third party candidate during his re-election bid in 2006. Lieberman retired from the senate in January 2013.

Lieberman praised Partners in Torah for the work it’s doing in the community as well as for its open and inclusive environment.

“In what you have made real in a very few years through Partners in Torah, there’s a very powerful lesson I think which is that over the years and centuries, we have developed different Jewish denominations and sometimes there’s real conflict between us,” Lieberman said.