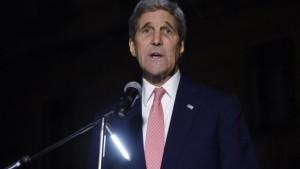 Secretary of State John Kerry arrived in Paris on Monday to underscore Washington’s “strong relationship” with France in the wake of the attacks on Paris, a State Department spokesman said.

“He will reiterate America’s commitment to our strong relationship with France and express our condolences as well as our shared resolve to continue countering violent extremism here and around the world,” State Department spokesman John Kirby said.

Speaking at the US Embassy, where he lit the outside of the building in the red, white and blue stripes of the French flag, Kerry said the conflict against the Islamic State militants is not a clash of civilizations.

“They are in fact psychopathic monsters. There’s nothing civilized about them,” Kerry said, according to the Guardian.

The secretary of landed in the French capital under unusual security precautions that precluded journalists accompanying with him from reporting his planned visit — believed to be the first such restriction for a secretary of state’s travel to a European capital.

However, shortly before Kerry’s plane touched down in Paris, French President Francois Hollande’s office made public his schedule for Tuesday, which included a morning meeting with Kerry. There was no immediate US response to the apparent breach.

Kirby said Kerry will meet and thank US Embassy staffers and hold talks with French officials.

US officials said the overnight visit had been closely coordinated with French security officials to ensure it would not interfere with the investigation into the attacks, the Washington Post reported.

Kerry, who speaks fluent French, has visited Paris at least 20 times as secretary of state, and expressed his solidarity with “the oldest ally” of the US over the weekend.