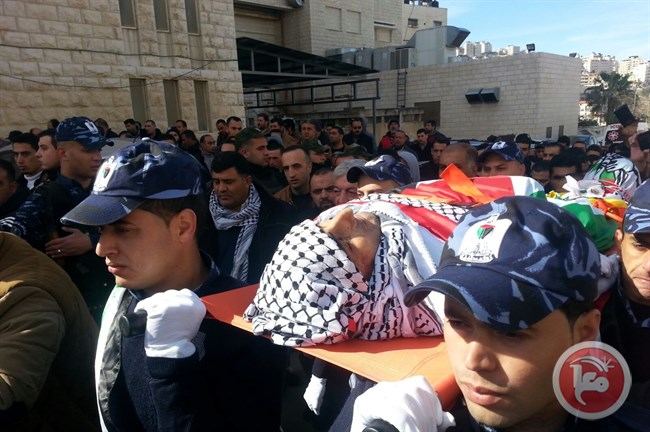 Thousands of Palestinians took part today in a military funeral procession of terrorist Palestinian Authority police officer Amjad Sukkari, who was shot yesterday after carrying out a terror attack against three Israeli soldiers west of Ramallah.

The “mourners” marched from Rafidia hospital to Shuhada Square in the city of Nablus, chanting national slogans applauding Palestinian “martyrs.” reportedly waved Palestinian flags as well as photos and posters of Sukkari.

Sukkari’s body was then taken to his home village of Jammaain south of Nablus, where he was buried in the village cemetery following funeral prayers.

Nablus Governor Akram Rajoub was present at the funeral along with officials from the PA and PLO. Representatives of Palestinian factions delivered speeches at the cemetery during the burial.

The PA has not officially commented on Sukkari’s actions, although Hamas and Islamic Jihad officials have hailed his attack as a “rejection” of the PA’s ongoing security coordination with Israel.

At the funeral, the marching Palestinians called out “Death to Israel” and demanded that hundreds of Israelis be gunned down.

“It is time for the machine gun, to shoot 500 people,” the man leading Sakari’s funeral procession shouted over a megaphone, his words raucously repeated by the mourners, “Muhammad’s army will return,” he vowed.

The mourners celebrated Sakari as a “martyr,” with many chanting slogans calling for intensified terror attacks against Jews and Israelis.