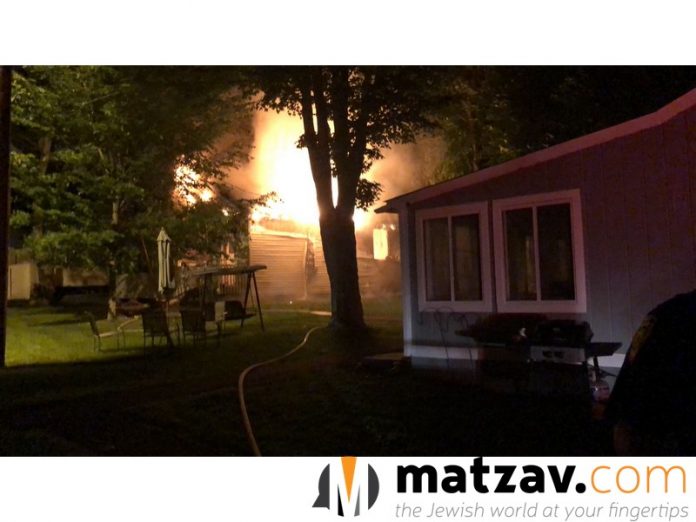 A bungalow at 60 Cromwell Road in Quaker Hill Cottages went up in flames early Friday morning, injuring bochurim from Yeshivas Novominsk in Boro Park who had rented the cottage for Shabbos.

The fire started from a gas explosion and quickly spread to engulf the entire house, located on the outskirts of Kiryas Yoel.

Hatzolah and local fire departments arrived on the scene and helped the fourteen bochurim evacuate the building. It took firefighters from 8 different departments – including Monsey and Shikun Skver – 40 minutes to put out the blaze.

Some bochurim were airlifted to the local hospital in Westchester with severe burns, while others escaped with only minor injuries and were hospitalized for treatment. Most of the boys having been released from the hospital already, with four more seriously injured boys remaining under care over the weekend.

The bochurim, twelfth graders, were slated to spend Shabbos at the colony with Rav Yaakov Perlow, the Novominsker Rebbe.

The conflagration broke at shortly after midnight in an area where they are no fire hydrants, requiring water to be brought from other departments.

At least one bochur sustained serious burns to his arms and legs.

The names for Tehillim are: