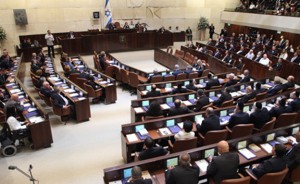 Last night, the Knesset approved the amendments to the Equality in the Burden Law with a majority of 49 MKs for and 36 MKs against. Among the changes approved are the extension of the adjustment period to 6 years and the postponement of criminal sanctions against chareidim who do not enlist in case quotas set earlier are not met.

Despite Likud Party Member MK Yoav Kish’s decision to abstain, majority was achieved due to the absence of Ha-Reshima Ha-Meshutefet Party members. Yesh Atid members are expected to appeal to the Supreme Court against the amendments, claiming that they go against the equality principle and constitute a breach of voters’ trust. Yesh Atid members also spoke against the Likud and Jewish Home parties who assisted in drafting the law less than 2 years ago.

Among the amendments is the extension of the adjustment period to 6 years, which will take effect in 2020 and not in two years as originally planned. In addition, during this period, a postponement of enlistment will be possible for anyone over 21 as long as enlistment quotas are met, essentially removing all criminal sanctions against chareidim who don’t join the army.

Chairman of the Foreign Affairs and Defense Committee Tzachi Hanegbi said that “the government is afraid that the opposition within the chareidi public will lead to them not meeting the enlistment quotas.”

Opposition leader Yitzchok Herzog said these amendments will cancel all the achievements of previous years.