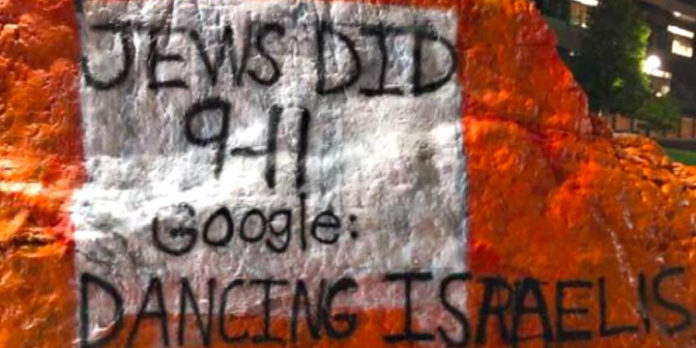 A landmark at the University of Tennessee-Knoxville was vandalized with antisemitic graffiti on Wednesday night.

According to Knox News, the words, “Jews did 9-11,” and, “Google: Dancing Israelis,” were found scrawled on “The Rock” — a large stone on the university campus that has become an informal designated area for graffiti and often political messages.

University Chancellor Donde Plowman condemned the graffiti, saying, “Last night, someone covered that message of love with an antisemitic hate message. We condemn that hate aimed toward members of our Jewish community, and we understand that words are not enough.”

“We want to work together to create a movement around what we want to be,” the chancellor added. “I will start by meeting with members of our Jewish student community this morning. We will expand the conversation to all [students] so we can work together on an action plan and will share more in the coming days.”

This is not the first time “The Rock” has been defaced with antisemitic graffiti. The Algemeiner reported in November 2018 that the stone had been covered with swastikas, and other white supremacist and neo-Nazi symbols.