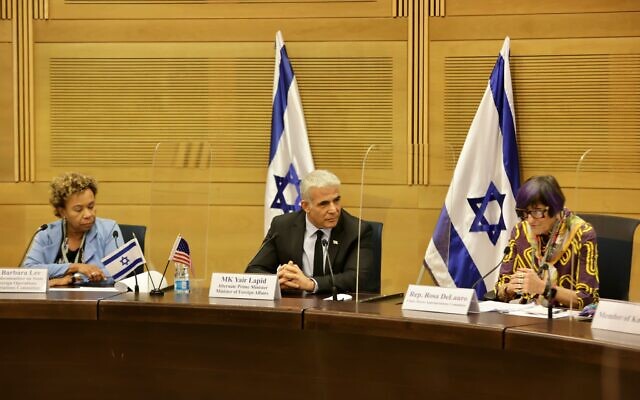 Foreign Minister Yair Lapid met Monday with a Congressional delegation brought to Israel by J Street, marking the first time in years that a senior Israeli cabinet member has engaged with the dovish Israel lobby.

Among the lawmakers making up the Democrat-only delegation in Israel are Reps. Rosa DeLauro, who heads the House Appropriations Committee, Mark Pocan, Barbara Lee, Melania Stansbury and Jamaal Bowman, among others. The trip, which will also include meetings with Palestinian officials, was sponsored by the J Street Education Fund.

In a tweet, Lapid said he thanked the group “for supporting the replenishment of the Iron Dome missile defense system, and we discussed the importance of continuing to strengthen the US-Israel relationship.”

The meeting was the first between a minister and a J Street delegation in at least four years, according to Haaretz.

Former prime minister Benjamin Netanyahu, who was in power from 2009 until June 2021, had a prickly relationship with the liberal group and right-wing members of his governments pointedly stayed away from meetings sponsored by the group or its annual conference in Washington.