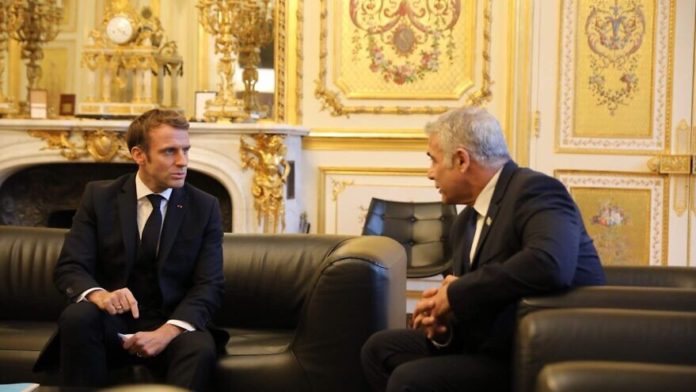 Only a credible military threat will stop Iran from continuing its race to a nuclear weapon, Israeli Foreign Minister Yair Lapid said on Tuesday.

Lapid’s remark came during what he called a “long and warm meeting” with French President Emmanuel Macron in Paris, on the last leg of a three-day trip to Europe.

“I reiterated Israel’s position that Iran is trying to buy time in order to move forward with its nuclear program,” Lapid tweeted after the meeting, held as representatives from the European Union, Russia and China resumed nuclear negotiations in Vienna with their Iranian counterparts.

The Israeli foreign minister, who is slated to replace Naftali Bennett as premier in 2023, said that he also impressed upon Macron “the immediate need for the strengthening of international sanctions [against Iran], and on the urgent need for a Plan B” should diplomacy fail to halt Tehran’s march toward nuclear weapons.

Asked to comment on the nuclear talks in Vienna, Kochav replied, “I’m not going into political affairs. As we’ve said in the past, we are preparing for all possibilities.” JNS.ORG