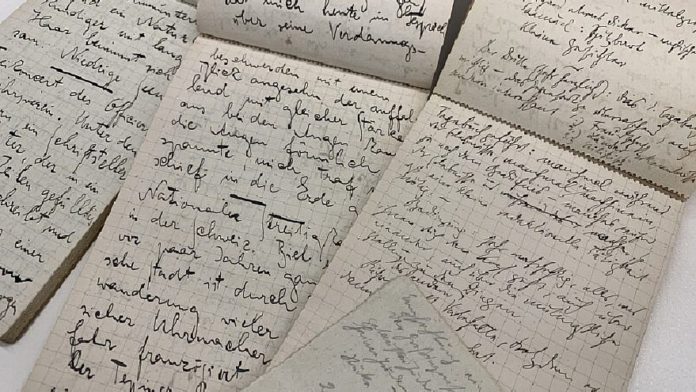 The final batch of personal papers belonging to Max Brod,—one of Czech writer Franz Kafka’s closest confidants—was transferred to the National Library of Israel in Jerusalem on Wednesday after decades of legal battles to complete the archive of Brod’s literary estate.

Hundreds of documents, handwritten by Brod and Kafka, were transferred to the National Library in accordance with Brod’s wishes, following orders by Israeli and Swiss courts to open vaults in Zurich where the materials were stored for decades.

The papers include three different draft versions of Kafka’s story Wedding Preparations in the Country, a notebook in which he practiced Hebrew, hundreds of personal letters, sketches and more.

The legal battle to obtain the papers began 12 years ago and involved court proceedings in Israel, Germany and Switzerland.

Brod’s literary estate and Kafka papers will be accessible to the public after being reviewed and catalogued by National Library experts.

Brod, an accomplished writer, composer and playwright, is primarily responsible for Kafka being one of the 20th century’s most influential writers. Kafka told Brod before dying in 1924 to burn all his writing and personal diaries, but Brod instead went on to publish many of the author’s works posthumously, including his novel The Trial.

“After seeing materials, including Kafka’s Hebrew notebook and letters about Zionism and Judaism, it is now clearer than ever that the National Library is the rightful home for the Brod and Kafka papers,” said David Blumberg, chairman of the National Library of Israel Board of Directors.